The Senior Class will battle against the Junior Class in the annual Powderpuff game, set to take place on November 6 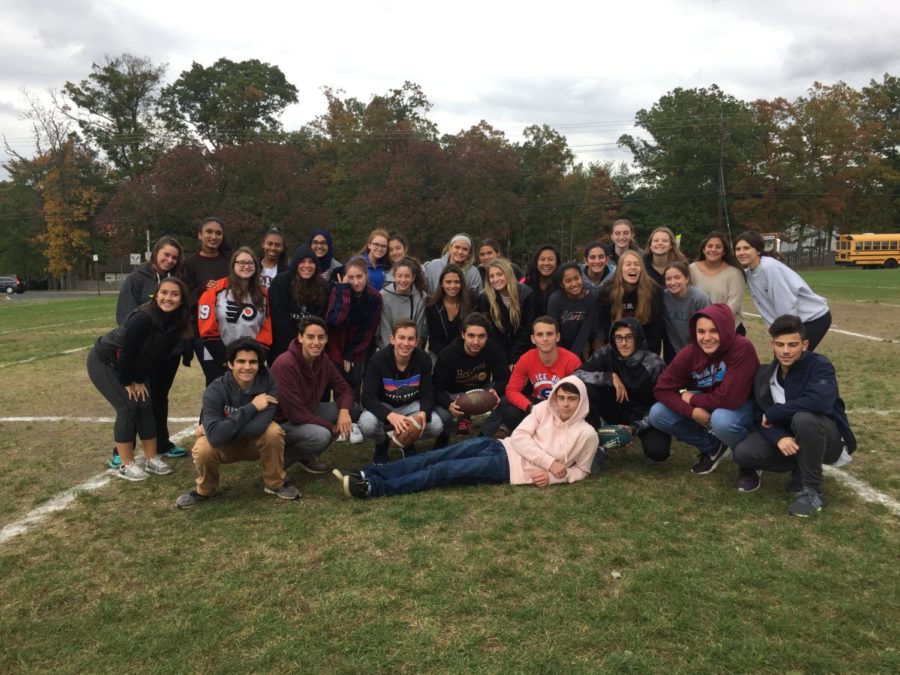 After losing last year’s Powderpuff game, this is the senior’s last chance to prove themselves.

East’s annual Powderpuff football game, which has been a hallowed school tradition for decades, will take place this Sunday, November 5. A roster of about 50 seniors, led by head coaches Jack Amon (‘18), Andrew Austin (‘18), and Drew Hoffman (‘18) will face off against approximately 50 junior challengers, lead by head coach Jacob Manders (‘19), in a grueling battle for victory and eternal bragging rights.

Although both Powderpuff teams contain a fairly even mix of student athletes from other sports and non-student athletes, the vast majority of the players for the senior team are returning members from last year’s game.

While they appreciate the game’s value to novices and veterans alike, the senior head coaches are excited to utilize their players’ high volume of past experience to the team’s advantage whenever possible

.“They like competition,”Amon noted. “It’s their last year doing Powderpuff, obviously, so it would be nice to come out with a win.”

This year, the team is being careful to avoid repeating what they feel were last year’s missteps, such as underpreparedness and understaffing. About a week before the first practice, Amon, Austin and Hoffman got together and diagrammed out several concrete game plays using a digital play creator.  Since then, approximately seven hour-and-a-half-long practices have been held so far. Each practice generally involves a catch-based warm up, the introduction of new plays, the review of old plays, and then a scrimmage to practice with the flag-football belts used during the game.

“We run through plays, we run through game situations, make sure they’re prepared for the game,” Amon explained. Adds Austin: “It’s all about simplicity, making the easiest possible way to win, and so that’s what we’re pulling this year.”

During their practices, the senior coaches and players have made a distinct effort to improve their team by getting to know one another closely, thereby improving communication and morale. Amon explains that the senior team’s greatest asset is that “we’re just really intelligent; we work really well together and we cooperate well together.”

[People] are always telling us we’re going to lose, but… the haters are our motivators.”

Senior practices have been a popular attraction for non-players, which should bode well for a good turnout at the game itself – the girls’ field hockey team, barred from participation in Powderpuff by their coaches, can always be counted on to come and watch practice, and they are joined by a sizeable crowd of students, faculty members, and players’ parents.

Meanwhile, the junior team, working under head coach Jacob Manders (‘19),hopes to give the seniors a run for their money, schooling themselves on the nuances of the powderpuff experience for their strongest first-ever Powderpuff game possible. As a majority of junior team members lack any prior experience with organized football, Manders and the junior coaching staff first focused on teaching basics, such as the rules of football, proper ball-handling techniques, and variations on types of defensive plays, before introducing formations and strategy. Manders explained that although certain prior skills are helpful to some members, such as the idea of “covering a certain area of the field” that can be learned from soccer, the team has developed “a certain system for relaying plays to [the] players,” and “all of the girls are picking it up pretty well”.

The juniors have also held seven hour-and-a-half-long practices thus far. At a typical practice, players warm up by running and then stretching. This is followed by any necessary troubleshooting before the team’s offensive and defensive groups break up to train individually, before the team comes together for general game lessons delivered by the head coaches, and then a scrimmage. Manders hopes that the team can overcome their inexperience by carefully reviewing specific football concepts.

“We’ve tried to teach concepts as comprehensively as we possibly could,” said Manders, “which we’re hoping will translate into the game.”

On the offensive side of things, a few notable players such as Barbara Christy (‘19), Bay Wilson (‘19), and Ali Kueny (‘19) stand out as key contributors to the team’s strength. On the defensive side, Lauren Bruno (‘19), Calli Ungerlider (‘19), and Ryleigh McLaughlin (‘19) are ones to watch.

Manders explains that the junior team’s greatest asset is their chemistry with each other, although he puts less of an emphasis on personal coach-to-player relationships than the senior team does, preferring instead to build a strong understanding of each girl’s capabilities on the field. He further asserts that the team has no defining weaknesses.

“I’m very satisfied with [the players’] efforts so far,” said Manders. “I think we definitely have a lot of room for improvement, but it’s not for lack of effort.”

The junior team hopes that they will prove victorious at the end of the day, although some feel as though the game’s calls has historically been slanted toward the senior team. Like the seniors, though, they regard Powderpuff as a way to have fun more than anything else.

“If we don’t win, it wouldn’t be unexpected, but it would still be a fun time,” Manders said. “[People] are always telling us we’re going to lose, but… the haters are our motivators.”

In addition, the team has found that Powderpuff gives them a useful medium to get involved in recreational football in a way that many may have been unlikely to pursue on their own.

Although the head coaches are responsible for training their teams, general planning for Powderpuff falls to SGA, who worked during their homeroom period to publicize the event, set ground rules for practices and otherwise prepare for the big game. This gives coaches and players who are also members of SGA a double incentive to strive their hardest for team success.

There is definitely an element of mystery about the game in these last few days of preparation, as both sides seek to maintain the secrecy surrounding their strategies. Amon hinted that the senior strategy involves “[p]ound[ing] the ball deep into the Juniors” and Austin insinuated that many surprise team strengths will come to light during the game. On the other hand, Manders states that the juniors simply intend to “go out there and play hard.” Instances of friendly trash-talking between the teams, meanwhile, are alive and well.

The Powderpuff game will take place Sunday, November 5, on East’s back field, at 11:30 a.m. Last year’s referees – Mr. Davis, Mr. DeWolf, and Mr. Cucinotti, are expected to return this year to call plays. All friends, family members, another spectators are welcome to come cheer on their class, root for their friends, or just partake in one of East’s most classic events.

“[Powderpuff] is a good way for people to get together,” as Manders puts it. “It builds class unity… and it’s a fun thing to do.”

One Response to “The Senior Class will battle against the Junior Class in the annual Powderpuff game, set to take place on November 6”