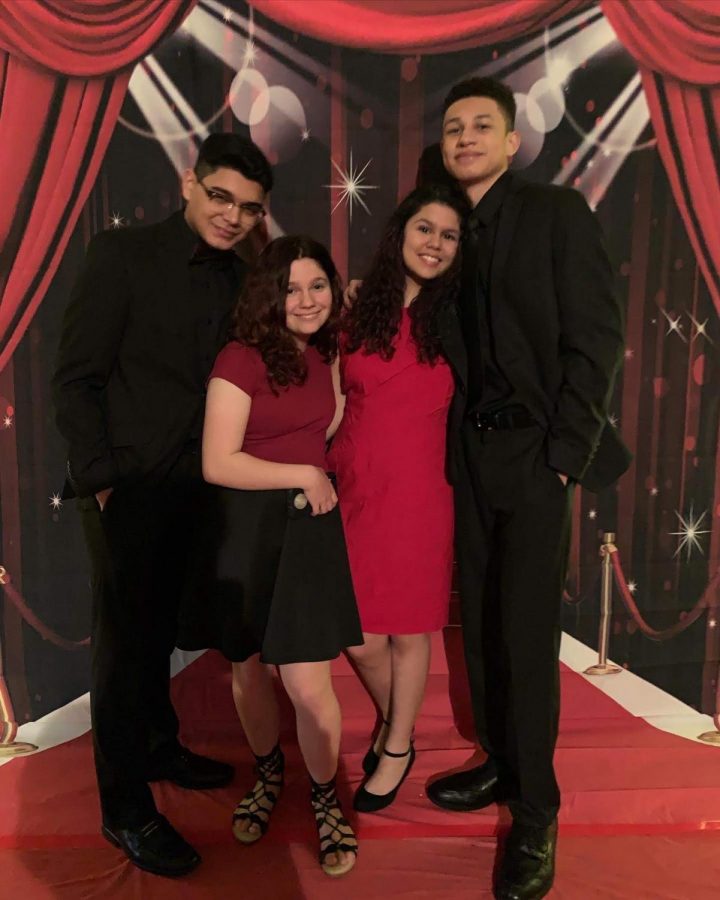 East students pose for a picture at the red carpet.

Sophomores and their dates went all out in velvety dresses and suits with ties at the Sophomore Cotillion dance last Friday. It was held in Cafe 2, starting at 7:00 pm and ending a little bit after 10:00 pm.
You could not even tell that the dance was in the cafeteria, the room completely. There were flashing strobe lights, an impressive red carpet, plentiful popcorn buckets and black curtains. Clearly, movie-themed, the dim yellow lighting with a Hollywood style backdrop added on to the astonishing transformation.
Pizza rolls, mozzarella sticks, pigs in a blanket and quesadillas were all served on the sidelines, warm in large foil trays. Of course, to satisfy students’ sweet tooth, brownies and cookies were served too. There were even “Worms in Dirt” served. This is pudding with gummy worms, gummy bears and chocolate flakes on top. Tiny water bottles were abundant in an ice tray beside the long line of food, refreshing the students for the long night filled with dancing.
Around 600 students attended a huge turnout for a school dance. More than half of the 2022 class showed up, and about 450 students from other classes too as their dates!

“The dance came out went a lot better than planned. We had had an extremely large turn out that reflected the spirit we have as a class,” said Devyn Levin (‘22), president of the class.
Levin believed that their dance was unique in their theme, which was Night at the Movies. Popcorn was served in the front entrance for the guests as soon as they made it passed the breathalyzer tests and after checking in their coats.

“No, I’m not sharing my popcorn with you,” said Ariana Flores (‘22) to her friend, with a copious amount of popcorn in her mouth and two more bags of popcorn held in her arms. Just like Flores, many students loved the popcorn.
The students danced to their heart’s content, jumping up and down in the mosh pit near the DJ stand. There were many seating areas in the back for the sophomores and their friends to relax and talk, along with several more in the hallways.

Levin (‘22) felt that the decorations came out just how they should’ve and that everything was a complete success. “I personally thought the dance worked out perfectly,” she said.
Other students thought the dance was a complete success. Christopher Wallace (‘22), who frequently ran back to the mosh pit after talking with his friends and date who sat outside in the hallway tables, basically had the time of his life.

“Honestly, this would be one of my favorite nights, I just wish it were longer,” Wallace said.
Students definitely had a blast at this year’s Sophomore Cotillion, and plenty of memories were made, just as many pictures were taken like the movie stars they were.