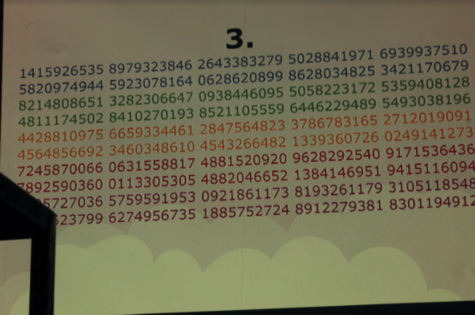 When he first tackled the concept of pi, Anish Suresh (’21) decided to start small and memorize a casual 100 digits. Four years later, after reciting a whopping 500 digits of pi to a delighted crowd at Cherry Hill East’s annual Coffeehouse, Suresh’s confidence in his numerical talent has only grown.

Having grown up in India, Suresh moved to North Jersey in November of 2016 and then came to Cherry Hill in September 2017. These were the latest in a total of 15 moves he has experienced throughout the course of his life as a result of his mother’s IT job. Suresh believes that his moves have been an essential factor in shaping his personality and his interests.

“I don’t think I would be like this if I stayed in one place,” he said.
Suresh was inspired to dive into pi by his mother and by Mr. Vijay, his math teacher and mentor at his last school in India. “I guess it was his choice,” Suresh said. “He told me to do a hundred first, and I recited it in front of all the students, then three hundred “just for the fun of it. That was in seventh grade. Then in eighth grade, I did five hundred…I just thought I’d stick with it.”

“It was something that was completely different from the other acts. The audience were completely surprised when I said, ‘Let’s get started’… it felt unique, you know, I’m doing something else. A lot of people sing, but pi kind of spiced it up a bit.””

Suresh memorized his current total of five hundred over the course of three years, although he estimates that he spent about a total of ten days’ time actively working. He began by memorizing digits in ‘sets’ of ten, which he eventually amassed into chunks of one hundred digits at a time. That way, he explained, he could cue himself by remembering which set he was on. He relied on websites which laid out all five hundred digits in columns, which allowed him to get a specific digit set’s spacing on the page “stuck in [his] memory” when reciting it back to an audience. During Coffeehouse, a colorful screen display of the first 500 digits of pi was projected on a wall beside Suresh, so that he couldn’t see it but the audience would be able to follow along with his count.

Set apart from the crowd in a Coffeehouse lineup heavy with various song and dance, Suresh is proud that his act was able to provide a little change of pace to the crowd. “When I finished the audition, their way of talking made me realize that I was definitely in it,” said Suresh. “It was something that was completely different from the other acts. The audience were completely surprised when I said, ‘Let’s get started’… it felt unique, you know, I’m doing something else. A lot of people sing, but pi kind of spiced it up a bit.”

Suresh has done similar recitations in public a total of four times. Although he was nervous when performing his first 100 digits, his confidence has grown with each successful performance. His Coffeehouse performance, however, was his first standing ovation, and in the days since he has been approached often in the halls with the compliments of an attendee.

“It felt really good that people recognized me,” said Suresh.

In addition to his work with pi, Suresh’s hobbies include solving Rubik’s Cubes. He can solve one in under fifteen seconds, and on the weekends, he attends Rubiks’ Cube competitions in New Jersey, Pennsylvania and New York. He also enjoys coding.

Suresh believes that he generally has a good memory, and encourages others to take a chance on pi and try to replicate his feat.

“Don’t hesitate,” said Suresh. “Just go for it; it’s not as bad as it seems. Try it, and your memory should start picking it up sooner or later.”

From amazing vocals to “Pi Guy” to breakdancing to balloon animals, face painting, baked goods and more… @coffeehouse2018 was a giant success! Thanks to all the talented performers and wonderful music students, who worked so hard to put together this fundraiser for Lupus.