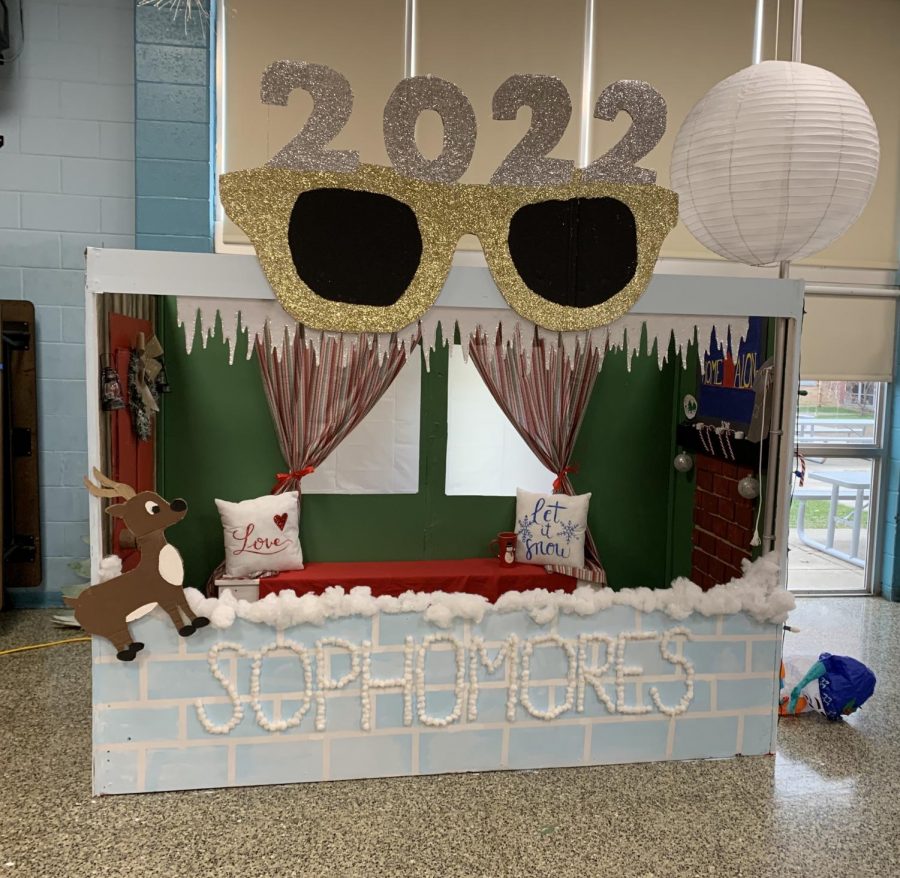 The sophomore class wins the 2019 booth competition with their innovative and creative ideas.

For the 2019 annual booth competition, held on November 15th, the sophomore class’ winter booth won over the votes of the teacher-judges.

Every year, East holds an eight hour competition. Each grade works on their booth from 2:30 p.m. until 10:30 p.m. During this time, each grade is given the chance to decorate wooden booths and compete for the best design. The winning class earns points adding to their Spirit Week total.

With the theme of winter, the class of 2022 decided to include everyone’s favorite aspects of the season, such as Super Bowl 52, a cozy log cabin, a gingerbread house, the New Year’s Eve ball and even some snow creatures.

One of the biggest contributors to the sophomore booth, Marcus Newman, said, “Definitely the New Year’s ball on the top of the booth [was the reason for winning first place].”

Newman also said, “I think a lot of the teachers were suckers for the cozy feel on the inside of the booth. It [had a] fireplace, blinds over the windows, wooden walls and a red door.”
The class president of 2022, Devyn Levin, said, “We learned from the mistakes we made last year and planned as much as we could ahead of the competition to achieve these successful results.”

The class of 2022 members will try to continue on this strategy next year in order to add to their winning streak.

Levin also said, “Knowing how each component of the booth was going to be made saved a lot of our time on the night of the competition, which was one of the biggest factors in receiving the first place points in Spirit Week.”

The class of 2023 created a spring booth, which included various weather conditions. They did this by creating a cotton ball storm cloud and a foam rainbow. The booth even contained various paintings of people walking during the springtime. Another creative touch the freshman added was a picnic tablecloth background embellished with 2023.

The class of 2021 created a fall-themed booth. It included themes such as, heading back to school, Thanksgiving, football and haunted aspects of autumn. The juniors added various props to their booth such as a skeleton, some miniature pumpkins, some school books, a big spider and a ghost on the top.

For their summer booth, the class of 2020 decided to display carnival rides, a ticket booth, a summer activity direction sign, an icecream truck, a lifeguard stand and many more aspects of summer. A large sunset over the ocean was painted as the background of the booth.

The sophomore booth did win the competition, but all of the class booths had amazing turnouts for this year’s Spirit Week. All of the contributors should be congratulated for their efforts in creating these masterpieces. This highly anticipated annual event once again did not disappoint the students and staff of East.