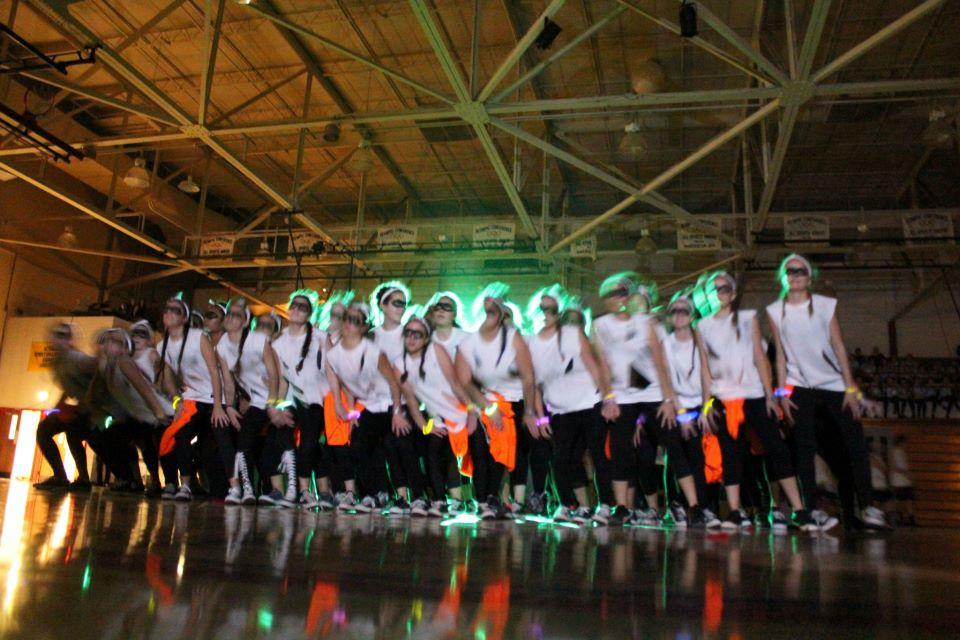 With the help of a cop car (decked-out golf cart), Mr. Rosenberg in criminal costume, and some strobe lights, the class of 2013 won Spirit Week.

The night started off with the freshman class, leading the crowd into dreamland with the study of oneirology. The freshman playlist included such songs as “The Lion Sleeps Tonight” (The Lion King), “Wide Awake” (Katy Perry), and “Hey Now” (Hillary Duff). Their skit revolved around a kid named “Benji,” and the ten-minute dance followed Benji through his dreams. Some highlights of the dance included “day” and “night” shirts worn by the girls and boys, respectively; a special segment of Mr. Gagliardi breakdancing to “How Do you Sleep?” (Jesse McCartney); and a mattress incorporated into the choreography.

The sophomores, whose topic was anthropology, danced through the centuries to timeless hits like “The Big Bang Theory” theme song, the “Flinstones” theme song, “1985” by Bowling for Soup, and “Party in the USA” by Miley Cyrus. At one point, a Flinstone’s-themed vehicle drove across the front of the dance. Sophomore boys also danced to “Sexy Back” (Justin Timberlake).

Everybody loves New York City, as the juniors proved tonight with their second-place finish. The junior’s theme of urbanology involved several quick costume changes and large building cut-outs in the background, highlighting the major cities of the united states (Las Vegas, New York, Philadelphia). Although some of their moves were designed to cut the other classes (Signs that said “Sophomores in tabloids” or “Seniors in Alcatraz”), their choreography was tight. Some song choices included hits like “Airplanes” by B.O.B., “Rumor Has It” by Adele, and “New York State of Mind” by Jay Z.

The seniors closed the night by imprisoning the crowd with their criminology-themed dance. They turned out the lights, relying instead on man-operated strobe lights and glow sticks to highlight their dancing. Their original orange prison wear was quickly shed, revealing white undershirts. We would be remiss if we did not mention the group of brave senior boys who stripped to their skivvies and danced in the crowd. The senior couples dance to “Criminal” by Britney Spears was also well-choreographed.

The final order was as follows: In fourth place, sophomores; in third place, freshmen; in second place, juniors; in first place, seniors.

The event was well attended by current East students, alumni, teachers and parents.