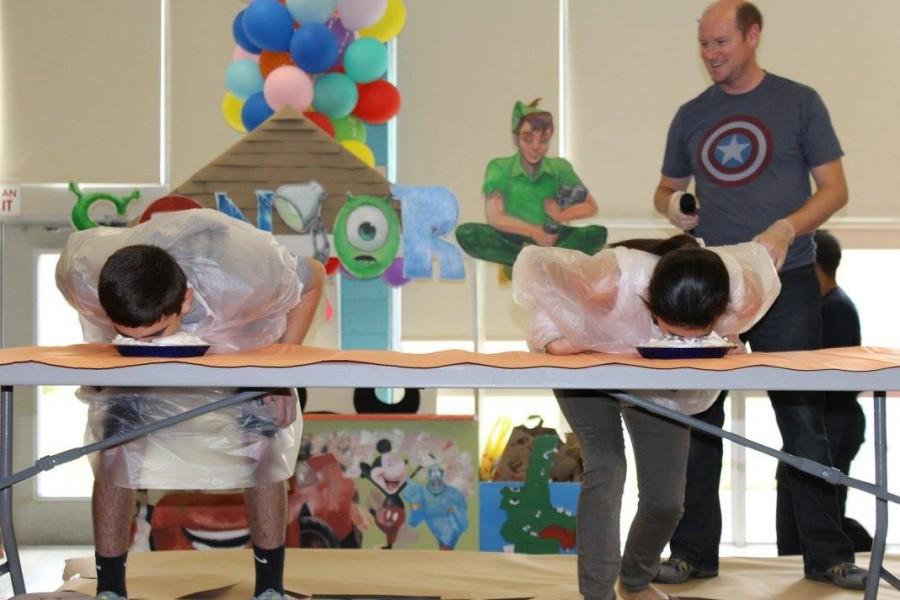 Students race to “fish” the fastest for Swedish Fish in a pie of whipped cream.

On Tuesday, November 25, Student Activities Director and teacher Mr. CJ Davis hosted another Spirit Week contest in Cafeteria 1 during both lunch/break periods. The object of the contest was to “fish” for Swedish Fish in a pie of whipped cream and find all five hidden fish the fastest.

“This is not a pie-eating contest; this is a contest we like to call ‘Go Fish,’” said Davis. “You need to find those five Swedish Fish and spit ‘em.”

Ian Miles (’15), Jake Walsh (’16), Robert Gertsch (17) and Hailey Weinberger (’18) were the first courageous scholars to volunteer to “Go Fish” during lunch/break 1. East students exhibited a great deal of anticipation as crowds slowly started to form around the contest setup.

Right after Davis cued to begin, Miles got off to a quick start, already finding a few of the gummies within a matter of seconds. Miles continued his great effort till the end and secured the win for the seniors. Walsh finished shortly after Miles, giving the juniors a second place finish. The sophomores and freshmen finished at the exact same time, tying for third place.

The second group of brave students to volunteer for during lunch/break 2 were David Monk (’15), Mary Kate Courduff (’16), Isabella Iacono (’17) and Blake Impagliazzo (‘18).

For this second round, Courduff got off to a blazing start and finished well before any other participant, giving the victory to the juniors. Monk then found all of his fish, allowing the seniors to place second. Following the seniors were the freshmen and then the sophomores.

“Go Fish” served as a humorous contest that allowed everyone to relax and laugh a bit before the big dance competition. Tomorrow brings the last day of Spirit Week and the pep rally; everyone wear red to show support for East!