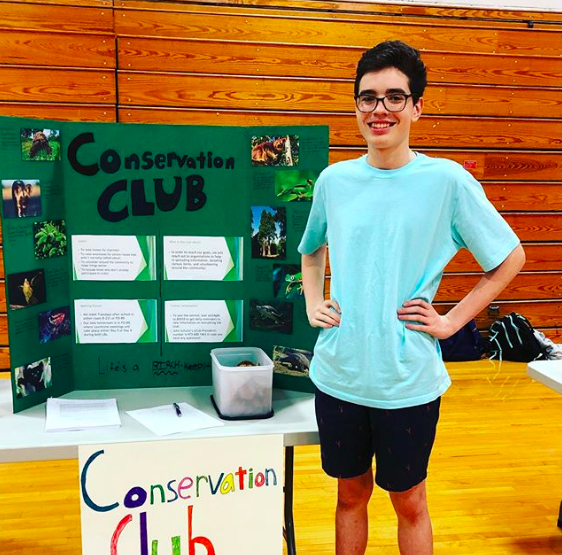 John Schultz ('20) creates the Conservation Club at East to help show his love and passion for the community.

Every high schooler at Cherry Hill East pursues their unique quirks and interests. In John Schultz, a senior at East’s case, his passions center around nature and humanity. Schultz has founded the Conservation Club at East and actively continues to spread his values of preservation of natural life within the community.

Schultz was adopted from Salt Lake City, Utah as an infant. Recently, his adopted parents had developed different types of cancers. Schultz had taken it upon himself to do something meaningful in his life “instead of moping around thinking that the world was going to end” when one of his grandmothers passed this year. To distract himself from the chaos of his life, he spent time learning about animals and the natural world.

“When life seemed like it was going downhill, I would distract myself by reading about different elements of the natural world, including animals and prehistoric extinct animals,” said Schultz.

Schultz voracious reading kindled an inherent passion for the world and an appreciation of humanity. His interests developed into his later years of high school and, during his senior year, he discovered a perfect opportunity to express his passion while educating his community.

“The forming of [the Conservation Club] is a very funny story,” said Schultz.

Schultz had not expected anything to progress from the idea he and his friends created when they first envisioned the Conservation Club. But, after they took action to make the club into a reality at the beginning of the summer, it evolved into a powerful influence that strives to benefit the East Community. Schultz believes that the school represents the future of our world, and he hopes to incite positive change by educating people about the issues that we currently battle.

“We got everything going and now we are an official club,” says Schultz.

The Conservation Club plans on starting an advertising campaign to draw creative minds to the club, to brainstorm new ideas on how they can further spread their message. Schultz ultimately hopes that the club will educate individuals about how to find a balance in their lives and convey that our actions have important consequences in our world.

“I don’t want the image of our club to [only focus]on the environment…I want the club to preserve humanity as well,” Shultz explains.
Schultz believes that the world is full of unnecessary hatred-a lack of compassion and intolerance gets in the way of progress. For progress to take place, everyone needs to be united by their humanity. John perceives his club as a group of outsiders that have not yet been accepted into other cliques in the school.

Schultz says, “a lot of misfits in that club are extremely talented and [through the Conservation Club] they get to use their talents for a good cause…and to feel good because they now have a new group of friends [with a common passion].”

The club does not solely center on environmental issues-they also discuss human health and resources, with the central belief that we as a community have the power to help those in need. They plan to create a Thanksgiving food drive later in November to mirror these values.

Schultz’s primary goal is to raise awareness of the complicated issues in our world today, on both a local and national level. For instance, the East’s UN council announced that over one million animals were threatened with extinction last year. The Conservation Club hopes that they will inspire students to gain respect for these animals and that, in doing so, they can play a key role in solving the imperative issues in our world.

“Another reason why I’m so conservation centric is the fact that I’m worried about the future of the next generation,” said Schultz.

Schultz wants to protect generations to come so that they can live in a bettered world, shaped by more compassion and awareness. But first, we must bring light to the problems that currently plague our society.

“Humanity can easily save the world. It’s just that there are sticks in the mud,” Schultz explains.

Schultz intends to pursue environmental studies as he advances into college. He hopes that his future education will provide him more opportunities to voice his messages throughout the community.

Schultz believes that his past has shaped him into the person he is today. Without his past experiences, he would have never had the ability to unearth his passion for conserving animals and protecting humanity.

“Forgetting is letting your past defeat you,” Schultz says.

According to Schultz, there are two ways to tackle a problem. One can allow it to destroy their dreams, or they can choose to learn and grow from it. “People always ask me how [I cope in] today’s [society]. It’s really easy to live in today [when you realize that otherwise], the future is going to fall,” he says.

That why Schultz strives to become a better person: he wants to better humanity, from his corner of life to the entire planet.