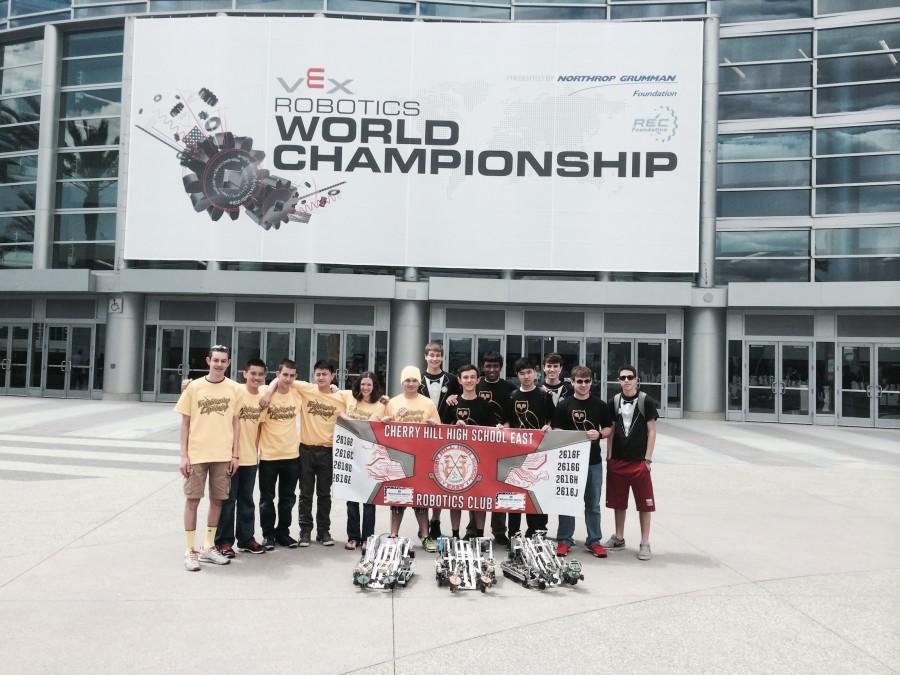 The VEX Robotics Competition collaborates with the Robotics Education & Competition Foundation to encourage students’ interest in science, technology, engineering, and math (STEM subjects) by providing a fun, but competitive environment where ideas can be turned into physical creations.

Although East has sent teams to the world championship for the past five years, this year has been exceptional due to the number of teams sent and the performance of those teams while there.

For the qualifying rounds, which were stretched over three days, the event was split into five divisions of 86 randomly selected teams. Each team played in ten 2v2 matches, in which it was randomly paired with an ally. All three of East’s team placed in the rounds. Team 2616B Black Tie Robotics, which was competing at the world championship for the third time, ranked 44th in the Technology Division. Additionally, Team 2616D Deus Vex Machina, which was at the event for the first time, ranked 14th in the Engineering Division. Team 2616F Frightening Lightning, which was in Anaheim for the second time, placed 37th in the Arts Division.

When it came time for the top eight teams from each division to select two partners for the next round, Frightening Lighning was the only East team to be selected. They lost in the quarterfinals, becoming one of two East teams to ever get so far in the competition.

“It was an amazing opportunity to meet and share ideas with other students from around the world,” said Dana Chafetz (’14), programmer and co-builder for Frightening Lightning.

However, these robotics competitions are not solely based on robot performance. Instead, teams are taught life skills by being given time to “scout” in between matches. This means talking to and taking notes on future teammates and opponents, while also networking with teams to form alliances for the elimination rounds.

“Scouting is the only real way to know which robots perform the best and which teams are the greatest,” said Mike Borinski (’14), team scout of 2616F Frightening Lightning.

“I am pleased to announce that although we have been to the World Championship for five straight years, this years has been our most successful,” said club advisor Mr. Joe Dilks.

He spoke to the students of the robotics club and their parents after the three teams earned their right to compete on the international level by taking three of the five world-qualifying spots at the New Jersey State Championship, which was held at East two months prior.

The other five East teams that did not get qualified to go to California, nevertheless had a good season by all making it to states.

“We did our best to ensure all East teams qualified for the State Championships. It was important to us that our club was properly represented at what would be the biggest competition of the year [in New Jersey],” said club officer Jeremy Welsch (’14). “[But] the kicker is probably [that we got] more teams from our club to Worlds than we ever have before.”

When it came time to finally go home on Saturday night, members of the East teams were already busily crafting ideas for the next game, which had been announced the previous day. Despite the air of excitement surrounding new designs, it was obvious that both students and parents were pleased with the experience brought by the trip.

“Being part of the world championship motivated me to try new things and challenged me to think creatively,” says Chafetz. “Spending nights laughing with teammates and competitors alike made this competition one of my most valuable high school experiences.”