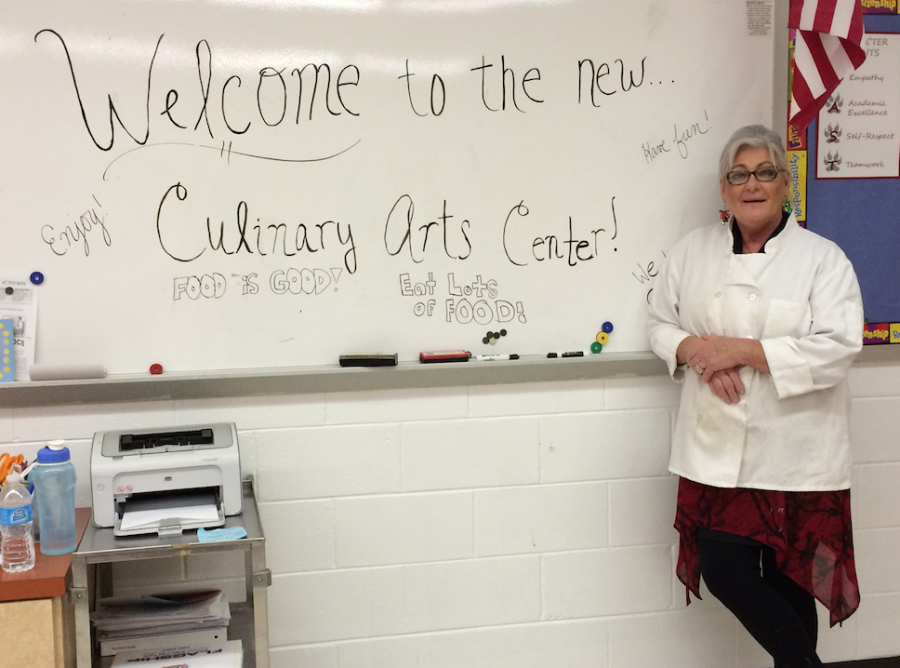 Ms. Dilba welcomes everyone at East to the new Culinary Arts Center

Greatly revamped in comparison to last year’s center, the reconstructed culinary kitchen opened on Oct. 7 of this year, to the great delight of cooking teacher Ms. Pat Dilba.

“The new culinary kitchen center was established because the previous room was in very bad disrepair,” said Dilba.

According to Dilba, Dr. Chapman came into the Culinary Arts Center last year and assessed the state of the room and decided that a new cooking room was a necessary renovation.

On Dec. 12, Dilba hosted a celebration for her new Culinary Arts Center. Exclusively serving food made by her cooking students from scratch, Dilba opened up the event to all students and faculty at Cherry Hill East.

“The most difficult part was trying to stop everyone from eating all of the food before the event ended,” said Dilba.

Throughout the day, a special concert event contributed to making Dilba’s event more notable. During LB1, Dilba invited East’s mixed A Cappella group, Stay Tuned, into the Cooking Center to perform for various cooking students, as well as for those who were simply stopping by the cooking room.

Additionally, several Board of Education members made an appearance at the event, as well as the likes of Assistant Superintendent Dr. Joseph Maloche and East principal Dr. Lawyer Chapman.

“I’ve dedicated this room to Dr. Chapman,” said Dilba, motioning towards a sign she has hung up in dedication to Chapman, “I intend to leave it up there for a while.”

Dilba also accounted in detail all of the new items in the room. According to Dilba, everything in the room was new: the countertops, the shelves, the ovens and essentially all cooking supplies.

“Before reconstruction, this room was pretty disgusting,” said Dilba.

Dilba truly expressed her gratitude towards Chapman, claiming it changed her entire outset on teaching classes in the Cooking Room every day.

“It used to be kind of depressing being in this room, being me,” said Dilba, “but now I walk in and I can’t believe it… it’s just wonderful.”