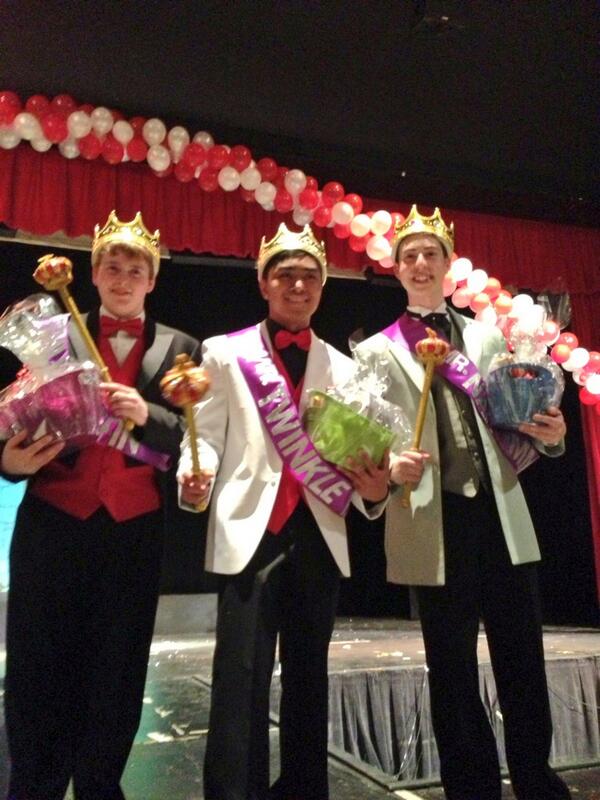 The night began as the contestants performed their opening dance to a medley of songs such as “Wrecking Ball” by Miley Cyrus and “Royals” by Lorde. Each contestant also got a moment during the dance to show off his dance moves.  The senior chairladies introduced themselves, Daphna Varadi (’14), Hayley Aaronson (’14), Sabrina Deutsch (’14) and Gianna Palma (’14), which followed with a short introduction of what the night would be full of. They presented the judges, who were all Mr. East alumni: Matt Patane (’09), Rishi Sarkar (’10) and Matt Tarnopol (’11) . The chairladies also announced the charity tonight’s proceeds would be supporting, which is the Children’s Hospital of Philadelphia (CHOP).

In between each portion, one of the chairladies announced a royal rule that kings must abide by.

The first part of the event was the swimwear, where each competitor presented a small scene as the chairladies narrated what he would be doing on a sunny day.

Mr. Thud Muffin (Thomas Hudson) was next, as he showed the audience a short video of himself performing little magic tricks to teachers. After the video, Mr.  Thud Muffin performed a series of magic tricks as two senior girls accompanied his act with singing.

Mr. D (Dillon Rebock), for his talent portion, acted as a struggling freshman searching for a club to join and sang a parody of “Stay the Night”. Then Mr. D sang a parody of “Firework,” in which he sang about abstinence.

Mr. Tall I Do Is Win (Jordan Schmidt) presented a comedy stand-up act which included jokes about his height along with a recitation of Hamlet’s “To Be or Not To Be,” in which he presented it in 28 impersonations of celebrities, teachers, cartoons and other contestants, which filled the crowd with laughs.

Mr. Twinkle Toes (David Aningalan) showed off his skills with an entire dancing act which even included a portion in which he danced under black light. He performed to a series songs, which ranged from slow songs to upbeat songs such as “Ride,” “Animals,” “Counting Stars” and “You Rock My World.”

Mr. Vibrations (Noah Hinrichs) did a DJ act in which he created beats and remixed songs like “Young and Beautiful” and even had other contestants throw out glow stick necklaces to the crowd. His act was also accompanied by a live orchestral quartet for a portion. Along with DJing, Mr. Vibrations and his friends reenacted the dancing scene from Napoleon Dynamite.

Mr. Bubble Butts (Cameron Butts) put on a comedy act where he showed the audience his quest to find a castle through a series of Snapchat stories. Mr. Bubble Butts conquered his quest by finding a castle… White Castle. He also had a dance portion where he and his dancers performed to songs that correlated with his alias.

Mr. King of D-Wing (Max Hoffman) performed an original song in which he explained his life as a performer. His song included various theatre performers as he incorporated portions from previous plays he has performed at East such as Peter Pan and Aida.

Mr. Oh My Josh (Josh Bonner) did a comedy stand-up where he told various stories of his life ranging from childhood stories of him trying to disobey his mom to his teen memories when he goes to Disney World and rides the Tower of Terror. His act had no moment of silence as the crowd was in constant laughter.

Mr. NaHummus (David Nahum) began his talent portion by singing an original song about school. Mr. NaHummus also did a comedy act where he performed several small acts in order to woo a girl. He did small acts such as drumming and dancing all while singing different songs.

After all ten talent acts came the formal wear portion of the pageant. A short video of the boys at Executive Clothiers played and then each contestant walked out with his escort as the chairladies told the crowd what his perfect date would be like. The competitors presented roses not only to their escorts but also to their mothers in the audience.

The last portion of the pageant was the question and answer session where each contestant was presented with a series of questions asked by the chairladies.

The chairladies then wrapped up the night by thanking sponsors and everyone who helped with any aspect of the production. The event raised over $10,500; a portion of the proceeds will go towards helping the Children’s Hospital of Philadelphia.

In order to end the royal battle for the title of Mr. East, the night ended with the coronation. Mr. Thud Muffin placed in third  and Mr. NaHummus placed in second. Reigning over the competition and placing in first was Mr. Twinkle Toes.

The night full of laughter was more than successful as it brought together members of the community to see and enjoy the event. The auditorium was filled to maximum capacity.

Everyone left the event in a good mood; nonetheless Mr. Twinkle Toes left with the biggest smile knowing he was crowned 2014 Mr. East.