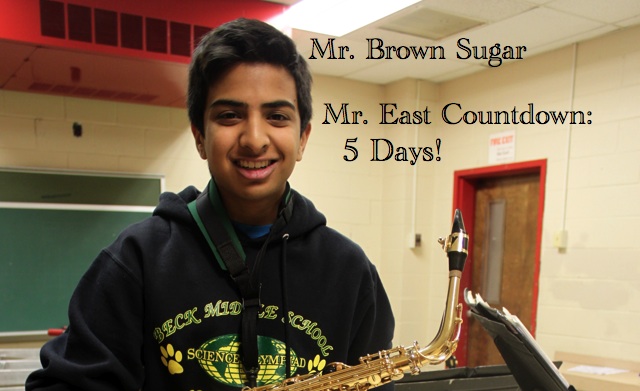 Ajay Nadig (’13) calls the moment he was born his proudest moment, and since that day, he has immersed himself in various activities at East. Nadig said his chosen Mr. East moniker, Mr. Brown Sugar, “captures [his] being pretty well.”

For Mr. Brown Sugar’s talent portion, the audience can expect a saxophone performance with the Jazz Band, as well as a short flute performance. He plays flute, saxophone and clarinet. Mr. Brown Sugar calls playing flute a “personal project” of his, as he does not play it for East.

Mr. Brown Sugar will not major in music in college, but enjoys it as a hobby.

“[Music] is just a side passion of mine,” he said.

He has other distinct career plans, although his playing “melodious tones” on the saxophone and flute can come in handy in the future.

“I want to basically just find damsels and small children in distress and rescue them. It has everything I want—travel, because I would need to travel around the world looking for damsels and children in distress, and also it would be great exercise because rescuing is hard work.  I think that’s how I can best put my unique skill set to use,” said Mr. Brown Sugar.

One thing Mr. Brown Sugar absolutely wants to do in his lifetime is learn to tie his shoes.

Mr. Brown Sugar said, “It’s my service to the school [to participate in Mr. East] because it just wouldn’t be the same without my awesomeness.”