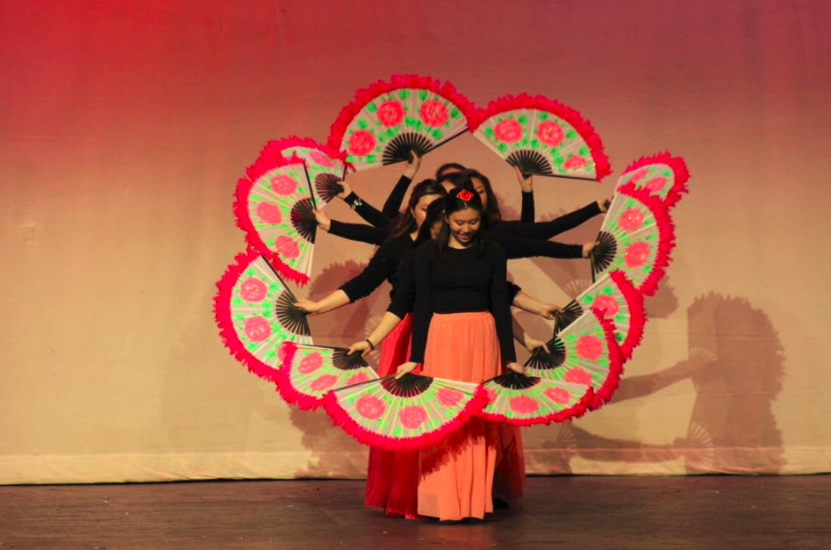 KCC puts on an exciting performance for MCD.

East’s Korean Culture Club (KCC), is a club available to join by all Cherry Hill East students. Within this club, there are four main groups: taekwondo, traditional fan dance, modern dance (kpop), and booth. The leaders of KCC makes sure that all students of all races can join to learn about the various aspects of Korean culture.

Nicole Chen (‘19), Iris Keem (‘19), Michelle Kim (‘18), and Grace Lee (‘18) are this year’s KCC leaders. All of them were chosen by the club’s advisors, Mrs. Nora Smaldore and Mr. Jonathan Blum. Chen, KCC’s leader of communications, explained the importance of KCC.

“KCC is an accepting club that helps students, especially freshmen, find friend groups,” said Chen. “The amount of students willing to participate and share the Korean culture is great.”

Like other culture clubs, KCC participates in East’s Multi-Cultural Day (MCD), a yearly event wherein students showcase a culture they are proud of with activities  ranging from holding booths to on-stage performances. The KCC placed first in MCD three years ago and third place two years ago. In previous years, the team has also performed at Six Flags and was even invited to perform at Rutgers University.

“It’s amazing to see how many people have the passion and respect for the Korean culture every year,” said Chen.

The KCC collects their profit by holding fundraising events. Every year, the KCC encourages students to come out to Chipotle to support them; Chipotle generally gives about 15 percent of proceeds from the day of the fundraiser to the club.  Chen said that the club is planning to use the money collected throughout the years to purchase necessities needed to enhance their performance as well as their booth.

KCC meets weekly in Cafeteria One, the date of the meeting depending on the section of the performance that is practicing. With many members taking part in other culture groups that perform as well, scheduling practices with perfect attendance is almost impossible. The KCC extends its practice hours during “Hell Week,” the week leading up to MCD, when groups stay after school every day to prepare for the competition with intense practice. The night before MCD acts as a dress rehearsal which is open to parents.

“Thankfully, we always manage to pull through despite difficulties in the end,” said Chen.

At this moment, students in KCC are encouraged to draw official designs for the 2017-2018 club’s sweatshirt. The deadline is November 10.