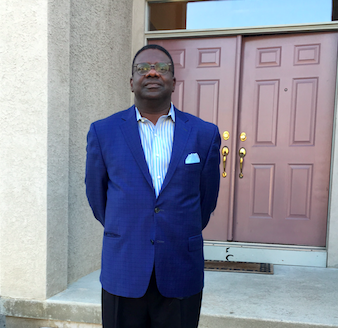 Dominic Asante was raised in the impoverished society of Ghana. He went on to become a successful lawyer with a Harvard education.

Unlike some citizens of Africa, Cherry Hill resident Asante had the privilege to begin his education early. Asante’s father held government careers as Attorney General, and later as a member of the United Nations. These positions allowed Asante to receive an education.

“It was a very pampered lifestyle,” said Asante.

The education system in Ghana lacked the developed curriculum and technological advancements that schools in America could offer him.  The mediocre public schools and the political instability made Asante choose to attend schools elsewhere.

“You always wonder, what if something happens? What if there’s a new government or the military steps in?” said Asante.

Like other privileged international families, Asante left Africa to receive an education. Asante studied at the UN International High School in New York, where he was able to receive a more advanced education than available in African countries.

Compared to other African countries, Ghana is a relatively stable country. This gave Asante’s family a choice to move back there when he completed high school. Aside from inefficiency in public education and industry, political and social conditions of Ghana were actually quite suitable.

“Ghana, relative to the other African countries, is probably the most stable.  It’s a constitutional democracy,” said Asante.

Asante continued to travel the world to improve his cultural knowledge. He developed an interest in international law through exposure to various types of political structures.

“I [moved to] Senegal, and then I probably spent a year in France, and then back to New York,” said Asante.

Asante chose to stay in the United States for college. He completed his undergraduate studies at  Haverford College in Pennsylvania. He then continued his education at the prestigious Harvard Law School in Massachusetts.

“The amenities [of college] are much better in the US [than Ghana] because it’s a more developed country,” said Asante.

Asante’s Harvard experience not only gave him a better perspective on the American lifestyle, but he also met many other students from Ghana and students awaiting successful careers, such as Barack Obama.

“The most interesting aspect of Harvard is the student body. It is the most cosmopolitan and international student body you’re going to find,” said Asante.

Since graduating from Harvard, Asante resides in Cherry Hill where he has established a better life for himself. Asante works as a lawyer. He is married to a Yale graduate, who is a doctor.

“I identify more with the American way of life…Between the two, I probably prefer the American culture [as to Ghanaian], just because I’ve been here the longest,” said Asante.

Asante has no intentions of moving back to his hometown in Ghana, but stays connected to  his Ghanaian ties. His home is decorated  with African tapestries, paintings and figurines.

“I still have very strong connections…I had ambitions to become president of Ghana,” said Asante.