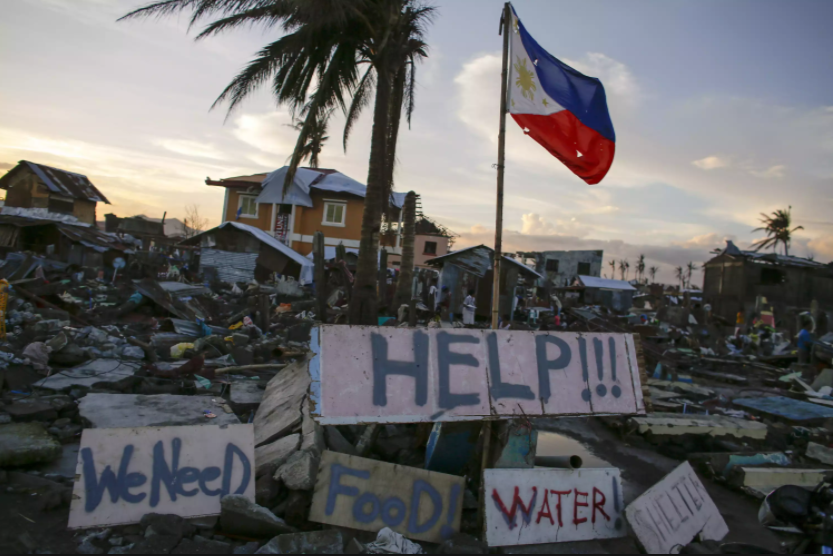 The above picture depicts only some of the terrible impacts the typhoon has had on the Philippines.

Houses crumbled. Trees snapped in half. Mothers watched their children being carried away by the waves. This was the havoc wreaked across the islands of the Philippines by Typhoon Haiyan in November 2013.

In the deadliest storm in the Philippines’ history, floods, landslides and winds reaching up to 220 miles per hour, killed 6,300 people, and injured tens of thousands more, according to the Filipino National Disaster Risk Reduction and Management Council.

Such a devastating natural disaster is hardly uncommon for the Philippines. As the most storm-exposed country in the world, it comes in contact with an average of eight to nine tropical storms every year. Hurricanes, cyclones and typhoons striking on a regular basis have made it difficult for the country to maintain its economy, infrastructure and education system. This instability is a major contributor to the poverty that over a quarter of Filipinos face, according to a report released by the Philippine Statistics Authority in 2015.

After learning about the many challenges the Philippines experiences, Arianna Fontanilla (’17), president of the Filipino Culture Society (FCS) at East, was inspired to take action to help the people of the Philippines get back on their feet.

“My mom’s side of the family lives in one of the provinces of the Philippines, and half of their house was destroyed in Typhoon Haiyan,” Fontanilla said. “People there are losing their possessions and they don’t have the means to get them back.”

That’s when Fontanilla discovered Caritas Manila, an organization founded in 1953 by the first Filipino cardinal in the Catholic Church in order to provide food, clothing, medicine and education to Filipinos of all faiths after the devastation of the Second World War. Fontanilla led the initiative for the East FCS to participate in Segunda Mana, a second-hand program run by Caritas Manila to collect donations for victims of natural disaster or poverty.

The FCS set up a box called a balikbayan box at the Main Entrance in front of Communications where people can drop off their donations. Balikbayan boxes, meaning “repatriate boxes” in Filipino, have traditionally been used by overseas Filipinos to send food, household items and clothing to their families overseas. All the items from the FCS’s balikbayan box will be sent to Caritas Manila, who will then distribute them in the Philippines to schools and families in need.

“People can donate new or second-hand toys, clothes, shoes, notebooks…[or] anything that kids or adults might need,” Fontanilla said.

One box has already been filled up since the FCS started the donation drive a month ago, and Fontanilla’s goal is to fill a second box by the end of the year. She encourages everybody to donate what they can— even the smallest donations make a difference.

“We’re so blessed and lucky to get everything handed to us here in America, so it’s the least we can do to give something back to the Philippines,” she said.

In addition to donating, doing research to learn more about the situation in the Philippines is a great way to help.

“When most people think of poor countries…they don’t really think of Asian countries,” said Fontanilla. “And the Philippines is kind of off to the side and not that many people know much about it. So I want to educate people [about my country].”

Fontanilla would love to see the FCS leaders who come after her to continue to run this donation drive every year. She hopes this first balikbayan box will start a tradition of East students helping the people of the Philippines rebuild their homes and hearts.