Last January when the Fashion Club officers decided to put on the first fashion show outside of DECA, they predicted an outcome of 200 to 250 spectators. On Friday April 16, an estimated 400 guests arrived to watch Cougars on the Catwalk revolutionize East’s Fashion Club. Not only did the show raise eyebrows with its fierce models and professionally run production, it raised over $2,000, all of which was donated to the FD (Familial Dysautonomia) Foundation.

According to the foundation’s website, “FD is a rare genetic neurological condition that affects the sensory and autonomic nervous systems, causing severe gastrointestinal, cardiac, pulmonary, orthopedic, renal and ophthalmologic problems.”

While giving charity to any organization would have been sentimental, donating to the FD foundation particularly hit home for club officer Sami Kofsky (‘10).

“My brother has the disorder and when I told the Fashion Club about it they seemed to really care about it, and it meant a lot to my family,” said Kofsky.

Kofsky’s brother, Mitch, is a freshman at Cherry Hill East and walked on the runway at one point in the night, during which he received a roaring and heartfelt applause from the audience.

When Kofsky first pitched the organization to the club, her story immediately touched the officers. Club officer Justin Wachman (‘10) said, “On top of fundraising which was a big deal, when we found out about Sami’s brother, Mitch, that was intense for us, and we knew we always wanted to do [the show] for a cause.” They knew, then, that the FD Foundation was the perfect choice for them.

Aside from running a charitable event, the Fashion Club took pride in putting forth a great deal of effort to put on the most professional show possible. Last year was primarily dedicated to raising money for the event. In addition to Kofsky and Wachman, officers Sammie Cohen (‘11), Joanna Kim (‘12), Tay Sconier (‘11) and Vivian Wu (‘10) dedicated themselves to raising between 800 and 900 dollars in bake sales alone, finding sponsors and organizing the event.

“We were considered a minor event because we’ve never had a fashion show before,” Wachman said, “a main event at East takes a while to get the date approved and we had to show that we were really organized.”

The club proved its worthiness for a show date as members relentlessly searched for sponsors. The Fashion Club received dresses, clothing and money from Doreen’s Paraphernalia, David’s Bridal, Irma’s Bridal, Nola Blu Boutique, Wet Seal and Beaute Ange Boutique. Rizzieri Salon & Spa provided make-up artists for the models. Both Bernard’s and Louis Christian Wayne Robert, local salons and spas donated gift cards up to 100 dollars to be won in raffles. A variety of businesses set up stands outside of the auditorium to display their products, and Wired 96.5 set up a station in Cherry Hill East’s very own hallway. Chipotle donated both food and money for the event as well.

Not only did the officers raise money last year and find all of those sponsors, this year they planned every facet of the event down to the very last detail. They put together all of the choreography for the models, all of the clothes and accessories together, styled the models’ hair, planned out each model’s make-up, designed the set, created the programs, publicized the event with posters and organized the entertainment between each section.

The show, which had a safari theme, was divided up into three sections: casual, business and formal.  Between each event entertainment was provided from a break dancing group lead by Kofsky’s dance teacher called Organized Chaos, East’s acapella group and Jazz Unlimited’s dance ensemble.

According to Wachman, this year’s casual clothing trends revolve around loose tanks with the single chest pocket, the business trends are centered on pencil skirts with tribal patterns and the popular prom formal wear includes flowy, floral gowns with embellishments.“East doesn’t offer any fashion classes, so we wanted to bring it to our school because it’s important to show students they [can start things like this] on their own,” said Wachman.The fashion show proved to be an amazing feat for the Fashion Club.

“We’re all really happy with it,” said Kofsky, “and FD had their own table there so some money went straight into their hands. They even put us on their website.”All of the hard work that was put into the production paid off—not only did the officers raise money for a good cause, but they completely reestablished their club, as the fashion show has now been added as an annual event on East’s calendar. As a revamped and extremely professional group, the Fashion Club is predicted to continue to shine on East’s runway next year. 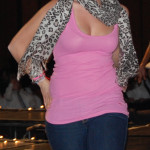 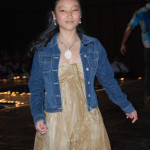 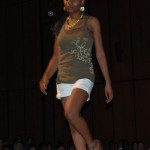 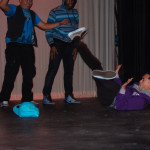 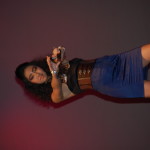 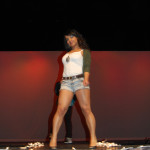