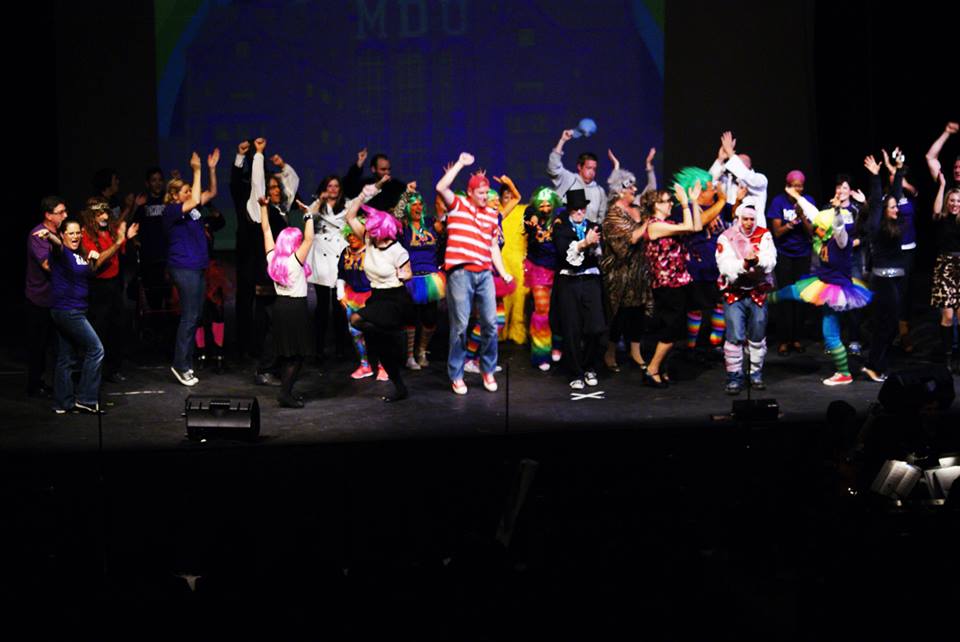 Charlie and the College Factory, the 2013 faculty musical, was performed on October 25 at 7 p.m. Written by Mr. Greg Gagliardi, Mr. Pete Gambino and Mr. Bert Figueroa, this one-night-only extravaganza was performed in front of a packed audience.

The play centered around Charlie, played by Mr. CJ Davis, a student who was eventually able to gain admission and a full scholarship to Most Desirable University (MDU) after completing a college tour with honesty and integrity. Like the classic Charlie and the Chocolate Factory book and Willy Wonka and the Chocolate Factory movie, the other students on the college tour were not quite as lucky, each of them meeting an untimely demise and learning a valuable life lesson.

The curtain opened to reveal a classroom, headed by Mrs. Sue Portiff (Mrs. Meghan Mikulski). The class is an eclectic group of students: there’s the kiss-up grade grubber Valedictoria (Ms. Lisa Hamill), the apathetic Walt Ever (Mr. Greg DeWolf), the jock Bull Lee (Mr. Mike Melograna) and the phone-obsessed Cellcilia Texer (Mrs. Dana Tete). The students are all eager for class to end so they can eat the wraps from the snack cart—five golden tickets are hidden inside them. Those who find the golden tickets will be lucky enough to tour MDU and graduate high school early.

After arriving on campus, the students meet the mysterious Kim Moral,  played by Mrs. Anne McCaffery, who offers them cash in exchange for MDU’s secret “college graduate” recipe. She wants to get the recipe no matter the costs—she wants to use it to bring MDU down.

Moral scatters off stage as Dean Wuntoo,  played by Mr. Matt Carr, enters. The tour begins with a rendition of “Tonight’s Gonna be a Good Tour” (a parody of the Black Eyed Peas’s “I Gotta Feeling”). But this tour quickly takes a turn for the worst as Cellcilia decides she is “going cray cray” and wants to use Dean Wuntoo’s teleportation machine to be the first human inside the Internet. Unfortunately for her, she gets stuck there, and her phone-obsessed father is no help. The Bumpa Lumpas, complete with green hair and orange faces, come out to remind the audience of the importance of unplugging from technology and focusing on the real world.

Next, Bull Lee and Charlie attend a party. Bull put a little too much in his red MDU cup, and before he knew it, he was high as a kite. So high, in fact, that he floated thirty feet into the air toward a ceiling fan. When Zumpa, played by Mr. George Zografos, tells him to follow his lead and fart to get down, Bull refuses to listen and ends up getting chopped up by the fan, with body parts flying everywhere.

After a “filler song,” to the tune of Michael Jackson’s “Thriller,” complete with East Principal Dr. Lawyer Chapman providing a speech in the middle, the tour moves to the library, where the books come alive. Each of the remaining students has the opportunity to talk to three historical figures: Shakespeare, played Mr. Bill Kovnat; Abe Lincoln, played by Mr. Bert Figueroa; and J.K. Rowling, played by Ms. Jenn Greenwald. After talking to them, the students must write a paper explaining what these people have taught them. Valedictoria didn’t take copious notes, and instead chose to use Starknotes, played by Ms. Holly Sassinsky, to plagiarize her paper. But after receiving a zero on her paper, Valedictoria learns that plagiarizing someone’s work is not what an honest student should do. Walt Ever, who drew a picture of Bob Menta–who later walked onto the stage–instead of writing an essay, received a better score.

Finally, the tour concludes at the Rec Center, where Walt Ever puts no effort into meeting other students and playing games. Even a giant chicken, played by Ms. Lee Rothstein, and a dancing gorilla, played by Mr. Greg Gagliardi, couldn’t convince him to mingle. But, by the end of the day, Walt learns that putting effort into schoolwork can actually be cool after the gorilla pulls him off the stage.

Dean Wuntoo is not going to accept Charlie—after all, he did break the rules by drinking with Bull. Instead of handing the information he had learned about the college graduate recipe to Kim Moral, Charlie gives it back to Wuntoo, simultaneously passing his final test. Impressed by his honest character, the Dean grants him admission and a scholarship on the spot.

Packed with laughs, special effects, costumes and Mr. Bill Kovnat in drag, the play had the audience captivated for the entire time.

“I’m speechless! It was hilarious. I was expecting it to be dumb, but in a funny way. But it was actually so well done. It was funny and the story was so good,” said Madeline Oppenhiem (’15).

East staff members involved with the play were happy with the reception the show received and felt like their hard work paid off.

“It was great. Especially the pink wig. You can always use a pink wig,” said Hamill.

Gambino, who created the projections, posters, shirts and many of the effects for the play in addition to serving as a writer, said, “I think it was a resounding success. The passion that everyone has had for this for the past five months really came through. I was absolutely thrilled by the audience’s reaction, they were laughing at all the right parts, and all the wrong ones, so overall I thought it came out great.”

Congrats to the cast and crew for a successful performance.  The money raised by the show will benefit the Cherry Hill Education Foundation and the Charlie Musumeci Scholarship Fund.