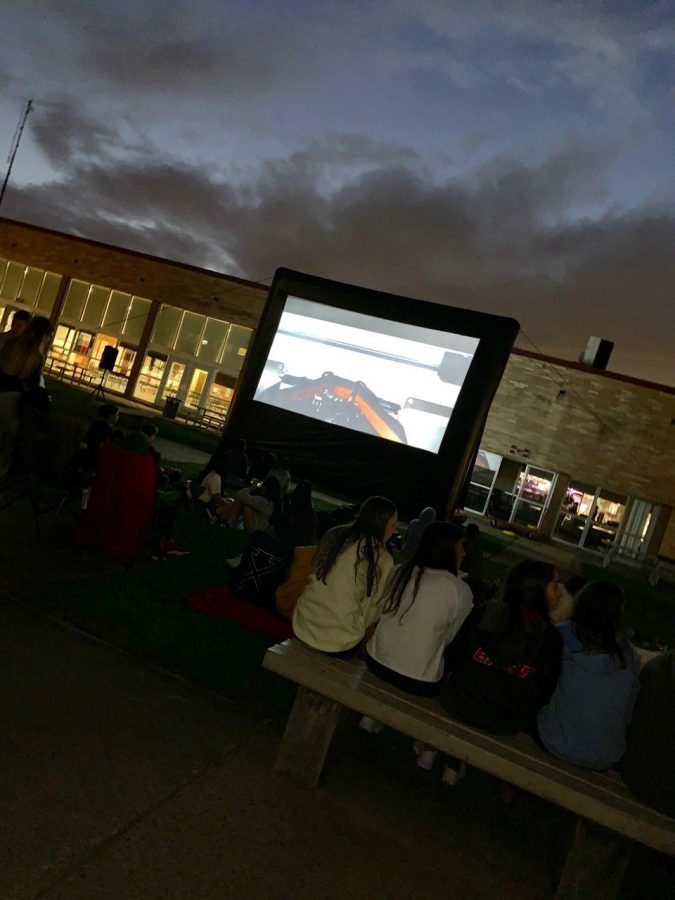 East community members gather in the courtyard to watch Jaws.

The Fall Movie Night at Cherry Hill East, on September 13th, was a success. Although there were no bodies of water around, the fear of sharks seen in the movie permeated through the courtyard on the gloomy Friday evening.

East students and staff gathered in the main courtyard to watch the 1975 classic, Jaws. The courtyard was filled with snacks sold from the Student Government Association (SGA).  The Sophomore Class of 2022 sold Chick-Fil-A chicken sandwiches.

The movie invoked fear, drew excitement and intrigued almost everyone who watched.  It caught the attention of many East students.

The grounds were covered with blankets and towels that students brought to relax on.  This allowed the students to watch the movie on the large inflatable screen, comfortably.

The movie was decided from a vote on Google Classroom, earlier in the week. Jaws edged out other movies, such as Beetlejuice and The Goonies.

According to the Emmanuel Cancer Foundation website, the organization helps with in-home professional counseling, material assistance, and emergency financial aid for families of young oncology patients.

Movies and snacks were not the only things the night had to offer that night.  SGA sold raffle tickets to win either a Jaws T-Shirt or a Shark Toy, to support their charity.

“[The movie night] was a really good time to hang out with friends and just relax in the school setting,” said attendee, Hannah Pollack (‘22).

The SGA hopes to do more similar events in the future in order to try and bring the school closer together.