“I can text with my eyes closed.”

“I can text with my hands behind my back.”

“I can text with two phones at one time.”

Often times, teens can be seen boasting about their advanced texting skills. Whether they are holding two conversations at once: one in person and one through text messages, or “paying attention” in school while covertly shooting off a text to their friend in another class, teens’ texting skills far surpass those of any other generation.

In most cases, teens demonstrate these skills in the safety of their own homes or schools, walking down the hallway or sitting in the cafeteria. In these cases, their actions are harmless.

But when new drivers are placed behind the wheel of a car, the act of multi-tasking becomes much more risky.

Kristen Hearn (’14) and Sumun Iyer (’14) are trying to get this message across to their fellow classmates.

Hearn said, “A bunch of schools are competing to see who has the best idea for raising awareness for Drivers’ Ed.”

The winner of this local competition, in schools such as Cherokee and Lenape, will win a grand prize of a driving simulator for their school’s Drivers’ Ed program.

Hearn and Iyer, determined to win, have created an activity to demonstrate how much texting can really distract a person.

“[In this activity], you have to say what the color of these words are instead of reading [the word] and then you try to do it while texting”, said Hearn. 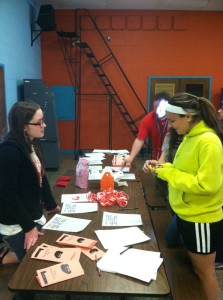 Bianca Nataloni (’14), was very impressed by how much texting affected her concentration and thinks that this could really help raise awareness among teens.

“It was much harder when you were texting because you had to really think about it”, Nataloni said.

In the end, no matter who wins this competition, Hearn and Iyer can walk away with the satisfaction of potentially saving several lives.