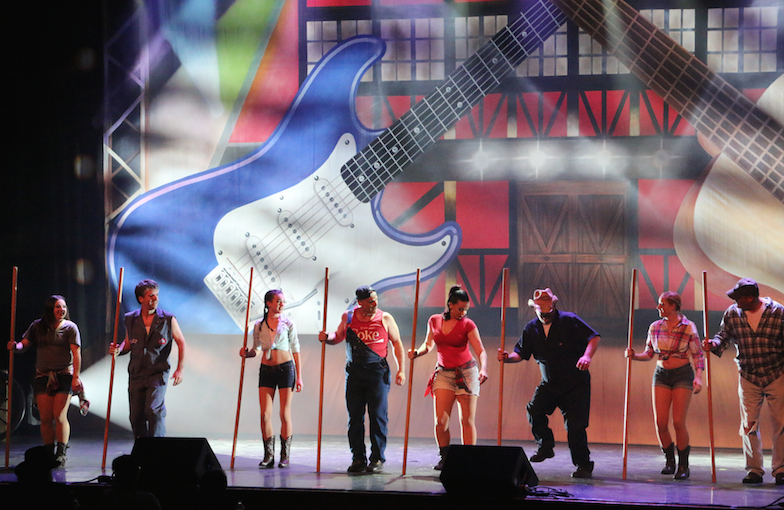 Marlee Zeitz, Eastside Sports Editor
4The Cherry Hill community ended the weekend on the best note possible. Sunday night, May 3, at approximately 7:10 p.m., some of Cherry Hill’s community members came out to perform in “Dancing with the Cherry Hill Stars” at Cherry Hill High School West. This lively three hour event was a fund raiser supporting all the Cherry Hill Public Schools. Down in West’s auditorium, fans filled the seats and eagerly waited for the show to begin. It was a packed house as spectators were greeted at the doors with play bills.
The show started with four country dressed men dancing to “Mountain Music” in a farm setting and cow girls back up dancing. The crowd clapped a beat for them as they ended the introduction with “Uptown Funk” and the crowd went wild as two of the men performed cartwheels off the stage.
Immediately following, emcee for tonight, Mr. Greg Gagliardi came on stage riding a white horse. Gagliardi then announced a list of all the sponsors and honored guests in the audience that made this event possible. The four judges sat in a line with a spotlight on them as Gagliardi announced their names and facts about each: Bruce Curless, Marjie Major, April Morton and Arnie Silver.
At the end of each number, Gagliardi asked the contestants some questions to answer in front of the judges, just like on the real show.
First duet of the night, Frankie Rowels and Sarah Duvall Pearson danced a contemporary style dance to a slow country song. “It was absolutely beautiful,” said one of the four judges. Dancing barefoot and including special lifts, Rowels and Pearson kicked off the night with a good start.
Next up, East’s own Jane Abo and her ballroom dancing partner David Lyon danced to “I want to talk about me” in 80’s themed costumes.
“It was so much fun watching you two, it was infectious,” said a judge.
Then, Debra Orrio and Mike Ciavarella took the stage and danced to “You’re not the one for me.” A very in sync, upbeat dance was performed and in the middle of their dance, Michael’s plaid shirt came off and he threw it into the audience.
Starting with flashing lights, Laurie Smith and Joe DeMarco danced to “Save a Horse, Ride a Cowboy.” Smith wore a blue dress and cow girl boots as DeMarco was decked out in his farmers outfit. A little bit of tap dancing was incorporated in this number as well. One of the judges expressed his thoughts that the energy level was great along with the choice of music.
Tierney Lee Howard, a young girl, just finished a tour of a musical Christmas Carol and sang to Cherry Hill’s audience tonight. Accompanied by a guitarist, John Demko, her voice soothed the audience in the middle of the first act.
Couple number five, Broadway star Melanie Montana and Marty Feltz danced to “These Boots are Made for Walking.” Montana’s bright red fringe costume caught the attention of the audience at first glance.
“You looked great up there together and used the stage perfectly” said one of the judges to Montana.
Alyssa Cabera and Dr. David Hulbert were up next and shared their excitement with the audience. Their vibrant energy got the the whole crowd giving them a nonstop clap.
“I thought it was great teamwork with tricky moves,” said one of the impressed judges.
Iris Guttin, a member of the Cherry Hill work field for 26 years, and her star Matt Elliot danced to “If you want my love” in jeans and white shirts. Both wearing similar hats, this couple had lots of fun and brought lots of smile to people’s faces.
Bob Errichetti and Amy Yerkes, couple eight, danced to “That’s My Story.” Yerkes is a local dancer and she definitely demonstrated her skills.
Lucas Kappier opened up his performance by sitting on a stool, singing a lovely slow song. Shortly following, dancer Michelle Wolf and teacher Alan Saperstein danced to Blake Shelton’s “Foot Loose.” Fast feet movement and lots of twirling impressed the audience.
“It was a great choice for you guys,” said a judge, referring to the song.

The “Groovers” known as Janine Cooney, Chelsea Dolchin, Michelle Kosmaczewski and Kimm McAllister were up next on the show. This group of Cherry Hill faculty members, who all take classes at the Raquet Club, wore pink button downs, jeans, cow girl boots and hats. They had the most support from the audience with signs and flashlights and a great amount of screaming.

A fifteen minute intermission then started separating act one from act two. The crowd was able to go in the hallway and vote for their favorite couple thus far. Snacks and drinks were also offered during this time. Kicking off the second half of the night, another vocalist, Lisa Diaz, sang a song for the audience to enjoy.
Couple eleven, two of East’s seniors Rebecca Cohen (’16) and Jordyn Kopelson (’16) started the dancing up again and danced to “Shake it Off” by Taylor Swift. The youngest dancing couple truly “shook it off” and gave it all they got. The judges loved what they had to offer and congratulated them on their upcoming graduation.
Following, Bob Malkin and Lindsey Krier danced to a country rendition of “Anaconda.” They smiled throughout the whole dance and had a lot of fun.
“Those boots were made for dancing and that is what you did!” said one of the judges to Krier.
A loud roar from the audience emerged as Henry Gosik and Debbie Rider walked onto the stage. With disco lights spinning all over the walls of the West auditorium, Gosik picked up Rider and spun her around. The two were very happy to hear that their performance was awesome.
Couple fourteen, Gina Iacoviello Perazza and Paul Grande took their energy to a whole new level when they danced to “Good Girl” by Carrie Underwood. Iacoviello Perazza had an extravagant red and silver costume and Grande loved country dancing with her. The two had “great foot work together.”
Larry Schreiber and Jessica Rodriguez did a wonderful job dancing together as the two only met this past Wednesday. They pulled it together in a very short amount of time and amused the audience. The judges were also very impressed and loved their performance.
Next up, Gail Cohen and dance studio owner Noel Rodriguez took the stage. A bright yellow costume was worn by Cohen that went perfectly with their song and dance.
“It looked fabulous, very professional, you did a great job,” said the judge.
Sarah DuVall Pearson came on stage to sing “Before he Cheats” and truly did a remarkable job. The audience really enjoyed her.
To wrap up the performance aspect of the night, vocalist Tierney Lee Howard and guitarist John Demko performed “It’s the Climb” and in the middle of their performance the whole entire cast of the night came out and clapped behind them.
Elanor Stoffman was then called out for some announcements. Thank you’s were given out to everyone who made this night possible and then the results came in. This years “Dancing with the Stars” winner for raising the most money was Larry Schreiber, who raised more than seven-teen thousand dollars for the district. Honorable mentions were given out as well to Melanie Montana and Jane Abo for having the largest number of individual donations. The overall dance winners of the evening was couple number six, Alyssa Cabrera and Dr. David Hulbert. For the best technical dance, couple number four, Laurie Smith and Joe DeMarco, took the win. The most creative dance couples Cherry Hill saw were couple thirteen, Henry Gosik and Debbie Rider and couple two, Jane Abo and David Lyon. Overall, the grand total raised towards CHPS from this one evening was $54, 246.
Student Representative to the Cherry Hill Education Foundation, Adel Boyarsky (’16) noted that this event “[brought] together different parts of the community for an excellent cause and a fun night. All of the proceeds go to the CHEF [Cherry Hill Education Foundation], so all of the funds go back to the kids.”
Many weeks of dedication and hard work came together for this one night. Overall, “Dancing with the Cherry Hill Stars” was entertaining, amusing and thrilling aside from being Cherry Hill’s biggest fundraiser. As a community, Cherry Hill cannot wait to see what is in store for next year, and the years to follow that.
Delete Image
Align Left
Align Center
Align Right
Align Left
Align Center
Delete Heading