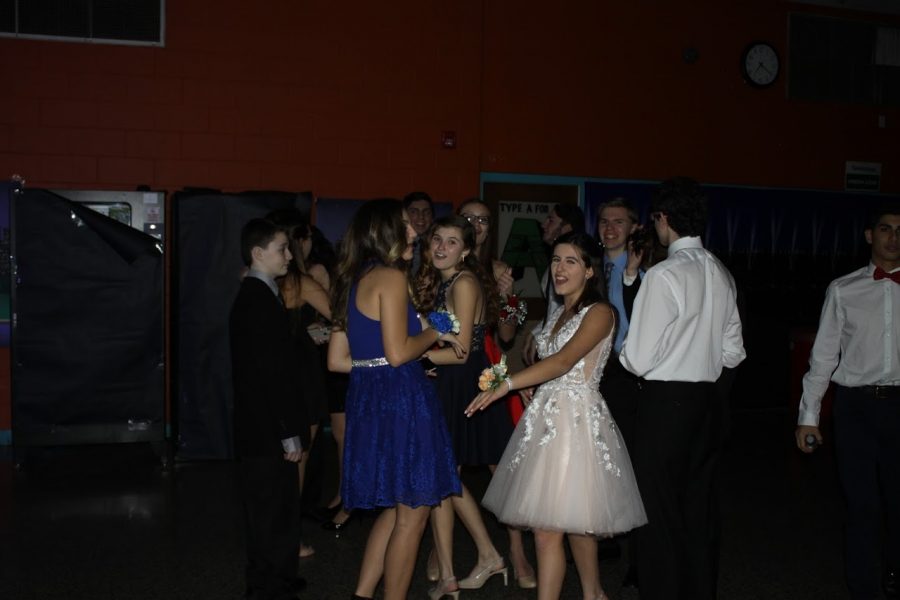 Students enjoy each other's company on the dance floor.

On Friday, January 11, more than 550 Cherry Hill East students had their own “night in the city” at the Freshman Dance and went to town with food, dancing, and a live musical act.

Coats were checked in Cafeteria I by the Class of ‘21 SGA members. Students then walked down a yellow-striped road through the teacher’s lounge and into Cafeteria II. Once in the cafeteria, the Class of ‘22 channeled a city under the stars for the dance: tables were decorated with yellow, black and confetti-filled balloons while the walls were wrapped in city skylines. The DJ booth was set at the front of the room, with strobe lights reflecting into the crowd.

“[We] had to build it… everybody came out here [into the cafeteria] during study halls… kids were working all day,” said Freshman Class President, Tim Ackerman (‘22). When asked about his experience at the dance, Ackerman said, “I think it’s going great, the DJ is great, and everything is going great… I thought it would be too crowded but it’s good.”

Students from all grades were dancing, sitting around tables with friends, and eating food. The freshman class offered dumplings, Chick-fil-A, and different desserts like cookies, brownies and make-your-own sundaes.

“It’s better than any proms… No one has stopped dancing,” said Dr. John Vivone. The DJ played hit songs and crowd favorites, like “Everytime We Touch” by Cascade, “Rake It Up” by Yo Gotti, and “Mo Bamba” by Sheck Wes.

“It’s been a lot fun. The music is pretty good and the food smells good,” said dance goer Declan Chodak (‘22).

But the real special event of the night came when King P, or Kelvin Parris (‘22), performed his new song, “Love So Soft,” to the crowd.

“I felt good. I think it was great… [The crowd was] really hype[d]. After I performed, everyone came up… they were hyping me up, they were excited, they were congratulating me, thanking me, saying I did a good job,” said Parris.

At the end of the night, the Freshman class gave out t-shirts to all the guests. The shirts are long sleeve and gray, with a small taxi cab by “2022” street on the front. The back has cars driving by a skyline that spell out “FROSH.”