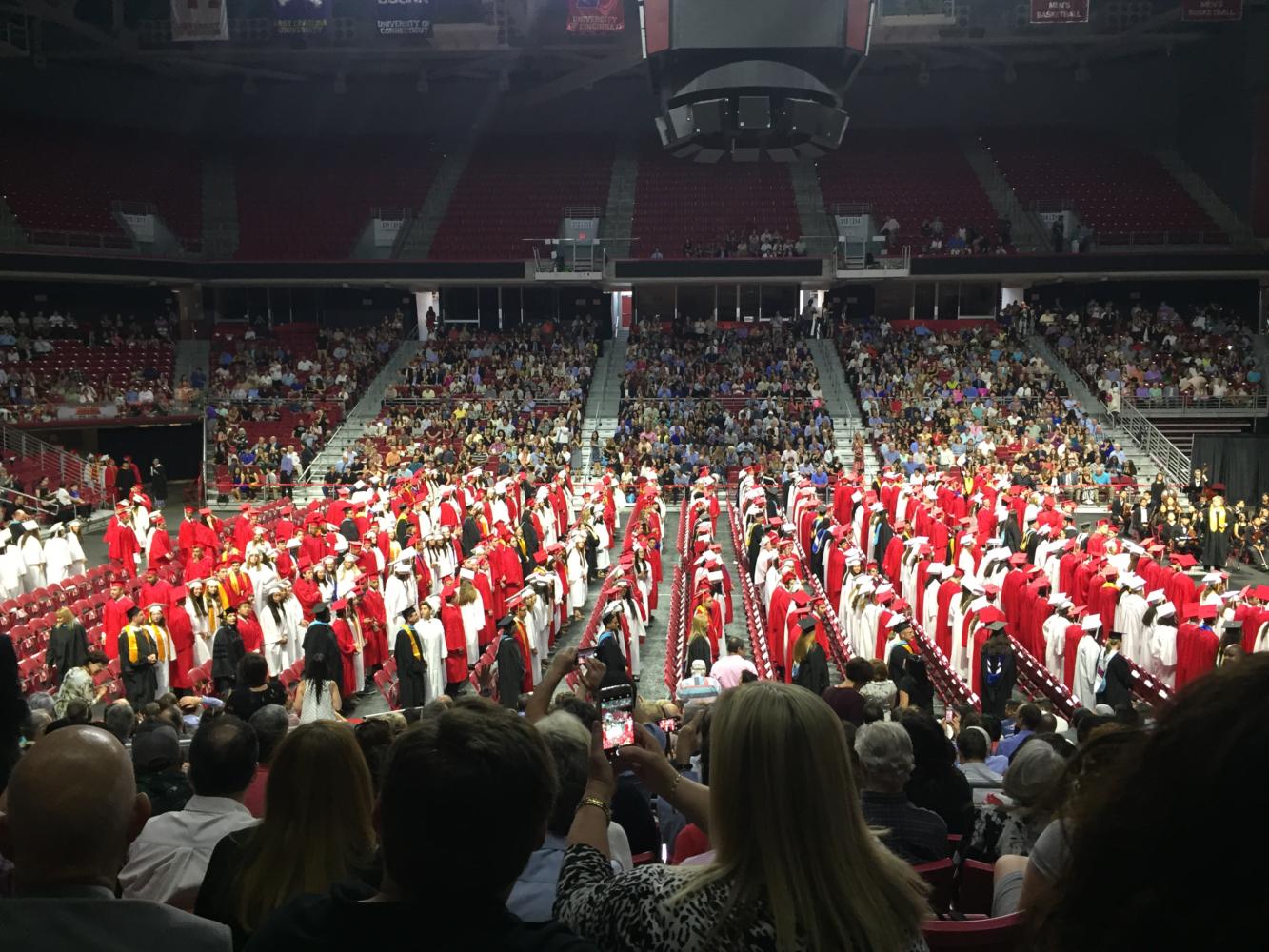 June marks a month of complete closure for the outgoing seniors to enjoy their final events at East. Senior solo night, prom and yearbook signing are only some of the events that lead to the final moments of a senior’s four-year high school experience. The season of caps and gowns marks the terminal moment known as graduation.

On Thursday, June 15, at 11:30 a.m., the class of 2017 Cherry Hill High School East students celebrated graduation at Temple University’s Liacouras Center. The stage was formatted into five rows of chairs with a middle part and a podium for the multiple speakers. The floor was lined with 15 rows of chairs and a middle aisle as well.

The ceremony was opened by East’s Orchestra and Wind Ensemble met by students walking into the stadium in groups of two. The valedictorians, Board of Education members, principals, Student Government Association presidents and vice presidents, summa cum laude students and speakers sat on the stage and walked into the procession first. After filing into their specified rows, the students and faculty on stage watched the rest of the class of 2017 students and East faculty walk to their seats. At the address of Dr. Dennis Perry, East’s Principal, Cedric Middleton (‘17), thespian, recited the Pledge of Allegiance. Moments later, East’s choir sang the National Anthem.

Alexa Happ (‘17), student athlete, gave the opening address by reflecting on her days at East and the unforgettable memories she had made.

Sung Kwang Oh and Madison A. Phillips took the podium next by giving their final speeches as SGA president and class of 2017 president, respectively. Oh spoke of how the class of 2017 is today’s present, not future, and how global unification is important in society. Phillips reflected on the year and the development of society seen across her four years at East.

Subsequently, Perry announced the names of the nine valedictorians once more. One of the valedictorians, Rachel Lim, spoke for all of her peers when giving the valedictory address. Lim related her high school experience to a movie; the final credits are graduation and the production staff is East faculty.

Parker furthered the ceremony by commemorating the students who will be military service candidates and speaking about her 17 rules-of-thumb for the class of 2017. Parker along with Ms. Chiarina Dorety and Mr. Bert Figueroa, advisors of the class of 2017, then presented memorial scholarships and awards. Dorety and Figueroa followed by speaking to their students about the great accomplishments made.

The Choral Department advanced the ceremony by singing two songs: “Try Everything” and “The Lord Bless You and Keep You.”

Zach Padersky, class of 2017 student, gave the senior address by reflecting on some of the most memorable moments the senior class has experienced. He spoke of Powder Puff unifying the class, Disney bonding the group, and Mr. East creating an unforgettable brotherhood.

Perry spoke one final time by presenting the class. With one final statement to one of his most memorable classes, Perry said, “With something to think about, this is Dr. Perry, let’s make this a great life for yourself — or not, the choice is yours.”

Emma Wooten (‘17) gave one final closing address to the seniors.

Of course, all good things must eventually come to a close. For the seniors, this became a reality as the recessional began and names were read from A to Z. Students were given their diplomas and moved their tassel from right to left, signifying their status as graduates. Of course, all students swore to be cougars until they die.