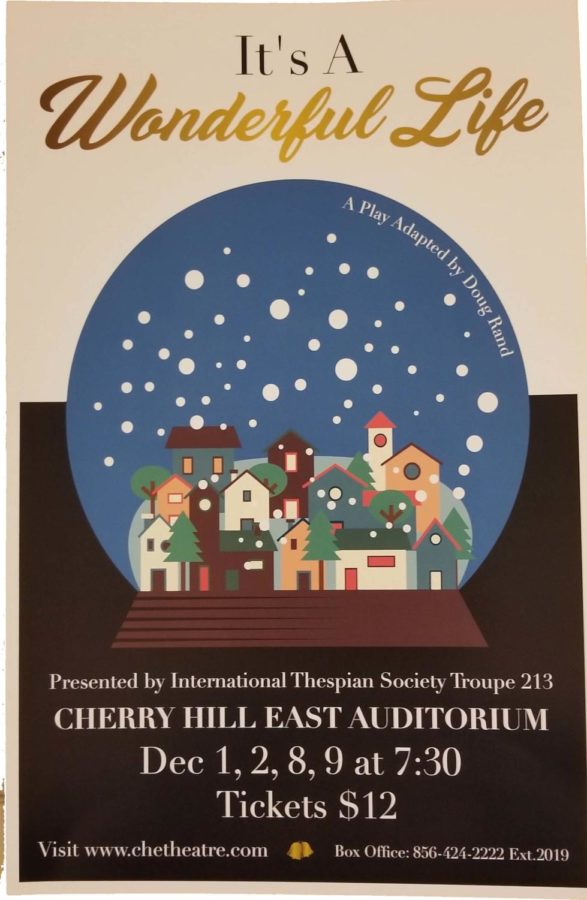 “It’s A Wonderful Life” is set to be another hit show from the wonderful East Thespian Society.

“It’s a Wonderful Life” is a Christmas classic that Americans have watched for years. Now, Cherry Hill East theater is adapting the classic film for the stage, anticipating that any viewer from age five to ninety five can find something to enjoy about this show.

The show centers around George Bailey, played by Harrison Smith (‘18) in the white cast and Kevin Naddeo (‘19) in the red cast. George heads his father’s rather modest company, which descends into turmoil when all of its earnings are suddenly lost by Uncle Billy, played by Jack Granite (‘19). This unfortunate event plunges George into a downward spiral that eventually causes him to long for suicide. During his emotional downfall, George’s wife, Mary Bailey, played by Courtney Bird (‘18) and Cassie Cuddihy (‘19), serves as a “guiding light,” per Cuddihy.

Clarence, an angel, played by Thomas Ziegler (‘20), assists George in his struggle to reconcile his feelings. Although there are dark undertones in the storyline, many of the cast members also described very upbeat parts of the show, making it suitable for an audience of all ages. Audience members can expect a rollercoaster of emotions, but an overall feel-good show.

“People will get a lot out of the play through George’s conflicts that he endures,” said Mr. Pete Gambino – making his directing debut – on what the audience will take away from the play.

Of course, along with the execution of any great production comes obstacles.  Being that  “It’s a Wonderful Life” is a well-known movie with well-known actors, many cast members face individual struggles regarding portraying their characters in a unique, yet still professional and accurate, style. However, producer Mr. Thomas Weaver explains that he feels confident in the final product; in the East Theater Department “

“We are not only blessed with a lot of good male actors, but we also have great female actresses and a large number of them, and the show and the characters in the show fit their personalities very well,” said Weaver.

Gambino said a more technical difficulty regarding adapting the production from its original movie form was “keeping the tempo up, keeping the pace up, and making sure that there aren’t any lulls in a really cool story.”

Gambino and Weaver aim to have minimal blackouts and noticeable set changes in between scenes, explaining that to the audience “it will almost be like watching a film.”  Despite these hardships, it is evident that the entire cast and crew is prepared and motivated to accept and overcome such challenges and create something quite rewarding and enjoyable to watch.  “It’s a Wonderful Life” will be different than anything ever seen at East before, and has many surprises up its sleeve which set the play apart from many others.

“Theater is about community, and the fact that this play is a feel-good show which can bring people together is pretty neat,”

By coming out to see “It’s a Wonderful Life” on December 1 and 8, with the red cast and December 2 and 9, with the white cast, you can also make an impact outside of the East community.  Gambino said that because lead role George Bailey loses $8000 in the play, the actors and technicians at East initiated a goal “to raise $8000 for direct relief which will support the tragedies in Puerto Rico and Houston.”

Ultimately, this production not only aims to be enjoyable and entertaining, but also to bring the East community together.

One Response to “Christmas classic, “It’s a Wonderful Life” comes to the East stage”