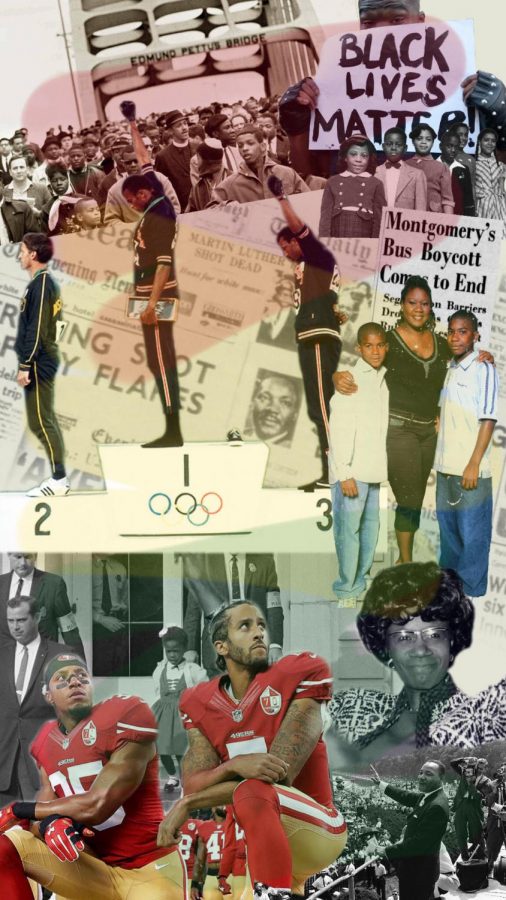 After waiting 100 years for civil rights, African Americans were finally granted equality with the signing of the Civil Rights Act of 1964. From the age of Black Power to Colin Kapernick’s stance at National Football League games, the landscape of African American culture has changed over time, but injustices still remain. With examples such as police brutality — highlighted by the deaths of Trayvon Martin and Philando Castile — these remnants of the past recall the pain felt by many generations.
In highlighting the history of the past, the month of February celebrates the voices of the Civil Rights Movement, the Black Lives Matter movement and the voices of the millions of African Americans living in the U.S. While the stories of African Americans have helped to shape the United States, in many cases, American students do not have the same knowledge of African American History as they do of the American Revolution. According to the Atlantic, in only about eight to nine percent of history classes are African American stories being taught. These discrepancies in the United States education system illustrate the lingering remnants of past discrimination and injustice.
As the Features section of Eastside, we highlight interesting students, alumni, teachers and stories about the student body at East. As we all come from different backgrounds, we as a section do not share the same experiences as our African American counterparts. However, while we cannot pretend to fully understand these experiences, we feel the need to highlight the importance of Black History Month and to give a voice to this part of our student body. We hope other students understand the importance of this month in not only our history but also in our present day.

The African American Experience at East
For the celebration of Black History Month, Eastside has reached out to the African American Culture Club and other African American students to share their own experiences. Many students and teachers participated in this story and we thank them for their honesty and willingness to tell their stories.
To Noah Bereketab (‘20), his experience at East has been defined by being one of the only African American students in his classes.
“I started to deal with racist jokes a lot. It sort of has become a part of my life. I had to accept it because I know it was going to be a part of my life, all throughout my life,” said Bereketab.
This sentiment is also shared by other African American students, for instance, Michaela Kennedy (‘20).
“Personally I like to take higher level courses, and I wouldn’t say it’s different, but I kind of feel like the odd one out,” said Kennedy.
Echoing Kennedy’s sentiments, Christina Cruz (‘20) said, “Personally, in my classes there are not that many African Americans in my classes. Cherry Hill East is overall diverse but [there] just [aren’t] that many African Americans.”
Azariah Donaldson (‘21) added that she thinks diversity in school is important.
“When I’m thinking of college I don’t think I’m going to go to an HBCU [Historically Black College and University] because I feel like in the real world it’s obviously not just black people. It’s white people, it’s Asians, things like that. So I think Cherry Hill does a great job of bringing diverse people,” Donaldson said.
For Jarren Andrade (‘20), it seems to be a daily struggle of being singled out. He feels as though he gets “followed around the school to make sure [he isn’t] doing different things which was said by the teacher.”
In an experience similar to Andrade’s, Obinna Okorie (‘20) describes one time when “I was in a candy store with my aunt and my sisters and the clerk kept following us around to ensure we wouldn’t steal anything,” said Okorie.
While there seems to be an importance in diversity within the core principles of East, there still seems to be a disparity between principle and culture. Some students like Naomi Bereketab (‘21) “think the use of the N-word at East is a little excessive by people that are not African American,” adding to the normalization of the N-word within American culture. The discussion of the N-word at East also came into play with the musical Ragtime in 2017, where there was a controversy regarding the use of the N-word in a school production.
The meaning of the N-word traces back to the days when African Americans were not only degraded by that word, but also abused for the color of their skin. The historical weight of the word can still be felt by these students, yet these students have heard the word being used against them or around them so many times that it has now become a normal occurrence.
“The minor discrimination that I would face on a daily basis is something like people saying the N-word in the bathroom knowing that I am there,” said Okorie.
According to Daniel Pipersburgh (‘21), it is hard for African Americans to stand up because they are “always getting a second hand opinion” and thus need to refrain from certain reactions. But with this there comes a hard balance. Okorie believes that by turning his cheek against discrimination, he is avoiding getting into trouble.
However, many students attribute kindness as the way they have dealt with struggles or overcome these uncomfortable situations. Whether it be growing “thick skin” or learning to understand the situation, African American students at East have learned to become the “bigger person.”
“The big picture is that there is evil everywhere whether someone treats someone poorly but inside everyone is equal. Being the bigger person and understanding that this is how someone is raised and I can either accept it or go about it in a positive manner and keep my head up even when someone is being racist or discriminating against me and where my people come from,” said Andrade.

Dealing with Discrimination
Discrimination. That big ugly word that packs a lot more meaning and emotion than one can even realize. Discrimination comes down to distinction—the way in which we perceive different groups, classes or categories of people, which results from misconceived negative attitudes, stereotypes and biases.
Racial-based discrimination has deep ties in American history and culture. Less than 200 years ago the Jim Crow laws were introduced in the South. They brought about the mindset of “separate, but equal,” further perpetuating and justifying racial-based distinction and discrimination. Almost 100 years later, the Civil Rights Movement of the 1950s and ‘60s still dealt with this ingrained attitude of separate but equal. Even today we still feel the imprint of this harmful mentality.
This article acts as a space for African American students and teachers to share their experiences with discrimination. Whether it be through small microaggressions or deep-rooted prejudices, these individuals have felt the weight of discrimination.
Daniel Pipersburgh (‘21) remembers the first time he was called the N-word. He was in eighth grade when a Caucasian student got mad at him and used the word. “I felt weirded out because I never had someone call me the N-word before,” said Pipersburgh.
Mrs. Jennifer La Sure, a special education teacher at East, remembers her junior year of high school when a boy called her a “black b***h” in her history class. She also remembers white students at her school “telling me that I wasn’t like the ‘other’ black students. They would tell me that I spoke well or that I was smart, or that my hair is ‘nice,’ and those are examples of microaggression. They thought they were being complimentary. They were not.”
Azariah Donaldson (‘21) remembers a time in middle school when an incident occurred between her mom and some of the ladies who worked at her school. Donaldson said that the women “were just kind of sitting there talking about my mom in front of me, and I felt like it was rude because they acted like I couldn’t hear them… At the end of the day, I am a child and they are adults.”
Christina Cruz (‘20) said that she has a fear of being pulled over by the police because of her race. She said that there’s “still some fear and apprehension [about police brutality] because of stories on the news and everything.”
This fear of brutality stems from constant media coverage of instances regarding racial discrimination in the policeforce.
But how do you deal with something that you cannot control? We asked students and teachers what they would say to someone who is facing discrimination.
Mr. Julian Vann, a social studies teacher at East, said that while he feels as though discrimination is an unfortunate part of American culture, “education is the key to really breaking down these barriers.”
Vann emphasized that the more you get to know people, the more time you take to understand their backgrounds and cultures, it will begin to break down the stereotypes and biases. He added that those who face discrimination should not “allow themselves to be drug down in the same close-minded attitudes,” instead “be the best person that you can be and that will allow you to really overcome these adversities.”
Donaldson believes that her reactions to discrimination stem from the way her parents raised her.
“My mom and my dad always just educate me and my siblings to let us know that we come from great[ness]. And that we’re not just stereotypes that go around and that we are beautiful. They always just put good thoughts into our heads, so that’s the mindset that I have every single day. If anyone were to say something rude to me, I would just brush it off because at the end of the day, nobody’s opinion really matters other than mine,” said Donaldson about responding to discrimination.
Mr. Jason Speller, a health and physical education teacher at East, said that it’s important to have a voice about discrimination.
“To have someone to go to, to talk to, to share [your] thoughts” is important, because “a lot of times, throughout history, people get silenced,” said Speller.
Following the same sentiment, Ms. Genene Barnes feels that when she faces discrimination, she has to understand where the comment is coming from. She usually steps back and reminds herself to play “devil’s advocate” and to create a teachable moment for others.
Speller added that students should try to find a teacher, guidance counselor or advocate to share their experiences and talk about their concerns.