At “Coffee with the Superintendent,” many parents address concerns over recent events in the district 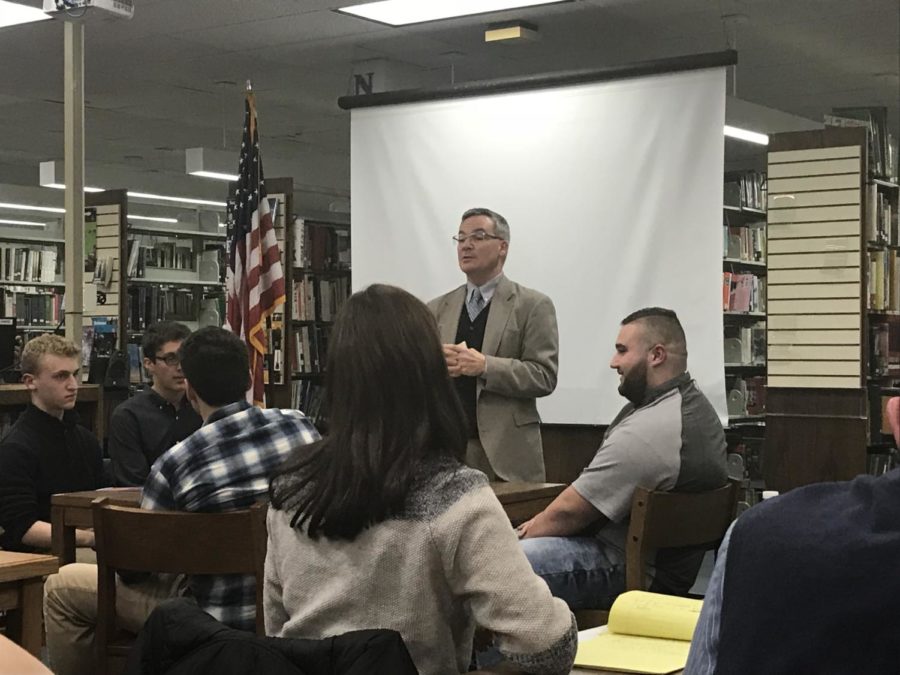 Many East students and parents were in attendance at Superintendent Dr. Joseph Meloche’s “Coffee with the Superintendent” event Monday night at Cherry Hill West. The subject matter, however, strayed far from Meloche’s Cherry Hill Public Schools 2020 Plan: A Clear Vision for the Future, which was the intended topic for the meeting. Instead, attendees voiced their opinions and concerns about recent events on both the national and district stages, among which were the Parkland shooting that claimed the lives of 17 students and an incident involving an East staff member last Thursday.

The meeting began with a comment from Justin Prechodko (‘18), who presented a petition to Meloche requesting “[the staff member] be reinstated immediately.”

“We want to be heard…[the staff member] was very much a part of my senior year and I feel…betrayed by my school,” said Prechodko.

While Thursday’s incident was a topic of great importance for most of the attendees, Meloche made it clear that for moral, ethical and legal reasons, he would stay silent on the matter, though Meloche admitted that any teacher suspensions would occur after the teacher had been given their due process and would ultimately be his decision as superintendent. As parents rose to speak, the conversation temporarily moved away from the incident, but would revisit the matter at several points throughout the two-hour discussion.

As the meeting progressed, some attendees stated concerns surrounding East’s handling of the Parkland shooting; some compared the school’s perceived failure to address it to the controversy over Principal Dr. Dennis Perry choosing not to observe a moment of silence for 9/11 this September.

“Cherry Hill East did not address the school shooting at any level…” said Shiri Sella, a parent. “We are out of step with the rest of the country and the rest of the world.”

Attendees then voiced their opinions toward Perry’s handling of the protest Monday morning, with some students saying they did not feel that their voices were heard or that their protests were respected by the administration and parents decrying threats to take away the privileges such as Senior Prom and the senior trip.

“[The students] shouldn’t have their first amendment rights stomped on,” said one attendee.

Meloche stated that Perry will provide additional clarification tomorrow as to his announcement this morning.

The meeting then turned its attention to the district’s security measures. Many attendees voiced concerns about anyone being able to walk into Cherry Hill’s 19 schools without ID, and sometimes, without a valid reason. The question of police officers in schools was also raised, as well as the possibility of installing metal detectors at entrances to schools. Increasing the number of security cameras were also suggested by a few attendees, many stating that there are only one or two cameras in each school. Many parents, in bringing up these points, expressed fear for their children’s well-being.

“I want my daughter to walk out of school [alive]” said one attendee.

These concerns were echoed by some of the students who came out to the meeting including Jessica Gurst (‘20) who said, “I’m scared for my safety.”

Matt Merowitz (’19) stressed the immediacy of the issue, “all the long term planning and stuff is great, but we need a solution…right now.”

Meloche, however, did not indicate a position one way or the other on most of the security measures, save for his stating that he believed metal detectors were not necessary.

“We have not seemed to determine that there’s a need for metal detectors,” said Meloche.

“There is no way to stop it all…they are doing the best that they can,” said Caputo.

Discussion circulated around these points for the better part of the meeting before Assemblywoman for the Sixth Legislative District and Chairwoman of the New Jersey Assembly Committee for Education Pamela Lampitt (D) spoke briefly about gun violence and mental health.

“If we don’t embrace mental health issues, then…we’re not really talking about the issue,” said Lampit.

Meloche wrapped the meeting up at 9 p.m., two hours after its commencement. The Cherry Hill Board of Education will meet on Tuesday for its action meeting at 7 p.m., where many students and parents plan to voice similar concerns.