Mr. Connor McVeigh joins the East community as a coach and a special education teacher 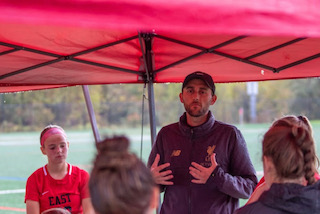 Mr. Connor McVeigh is a brand new edition to the Cherry Hill East faculty. He is not only an addition to the teaching staff, but he is also a huge asset in the sports department, being the Girls Varsity Soccer coach and the Boy’s Basketball analytical coach.

McVeigh teaches English 2R, Algebra 1R and is a special education teacher. He decided he wanted to because a teacher because of his love for sports.  He thought it would be exciting and interesting to become a coach, especially for a highschool team.

As McVeigh grew up and gained his love for sports, he knew coaching would be the perfect fit. Through coaching, McVeigh became interested in teaching.  Coaching gave McVeigh his passion for teaching kids. There is nothing he loves more than watching his players succeed. He thought it would be just as rewarding to become a special education teacher, and see his students succeed as well.

McVeigh was faced with a lot of work from the start.  He had many challenging tasks which included juggling both coaching techniques, learning all of the analytics, prepping for each school day and grading assignments.  McVeigh was tasked with no easy job, but he learned the balance that was needed to get through the days.

One of McVeigh’s athletes, Carly Drumm (‘22), said, ”McVeigh puts a lot of effort into making game plans and researching what we can do to win. Additionally, he does his best to try and make the program better.  He does this by bringing all the levels together and interacting with all the players.”

As McVeigh learned to become a teacher, he had the advantage of teaching at his own high school.  McVeigh already knew what to expect since he was a student at East growing up.

“It made the transition easier knowing the environment and community that I was getting myself into,” said McVeigh.

Before officially joining the East staff, McVeigh had the opportunity to meet the new administration. As McVeigh was being eased into things, he began to become more and more comfortable with his daily routine.

It was a major adjustment to begin walking the hallways as a teacher and not a student.  However, McVeigh turned to what he loves most, sports, as his source of comfort. Ironically, he did the same in highschool.  Sports have always been a major part of McVeigh’s life, which is why he is so grateful to be a coach at Cherry Hill East.

“Coaching gave me a way to get to know the students, and it made my transition easier,” said Mr. McVeigh.

McVeigh uses his sports knowledge to make him a better teacher. McVeigh incorporate sports into his daily lessons, which allows him to learn more about his students’ lives.  McVeigh has made an effort to learn what sports and activities each of his students participate in. This has been very beneficial to McVeigh as a new teacher. It allows him to relate to his students and make personal connections to them.

Sports have helped Mr. McVeigh in so many more ways than he could have ever imagined.  McVeigh’s knowledge on soccer, wrestling and volleyball is helping him to improve the sports program for this year and years to come.

McVeigh is excited to see what this school year holds, regarding his teaching position and the sports programs here at Cherry Hill East.