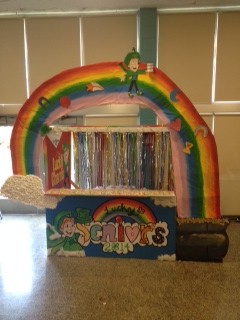 The different classes gathered their best artists this week to design and create the class booths.

The freshman class stepped up their game their first year. The colorful front has the logo for their cereal “Froot Loops” with a picture of Tucan Sam. The other side also has a picture of their “Froot Loops” logo looking like a cereal box.

The sophomores used a brown-orange color scheme for their “Honey Nut Cheerios” theme. The entire booth looks like it has honey running down the sides and the front shows the logo and “2016” under.

“We wanted [the booth] to be simple and we didn’t want any contrast… we wanted it to look unified,” says Priya Mistry (’16).

“We felt like if we put cool colors in there like green or blue… it would have clashed with the rest of the booth,” says Grace Shen (’16).

The juniors had a sports-themed booth just like their cereal “Wheaties”. One side shows an athlete with a hole cut out for people to put their heads in. The slogan is displayed on the front, something that the underclassmen didn’t have.

“Things got pretty competitive… we didn’t think the seniors were going to get their acts together but they totally did last minute,” says Allison Kritz (’15).

The seniors used other mediums including “Lucky Charms”–their cereal, a cardboard rainbow, and cotton balls. Lucky, the mascot for this cereal is seen on the front, insides, and one side of the booth.

“On the commercials, there are scenes where it’s nighttime and the kids are trying to find Lucky and his Lucky Charms… we decided to do that but instead of having the kids from the commercial, we did Chapman and Davis,” says Maura Roncace (’14).