Zac Efron stars in the predictable, yet charming “We Are Your Friends” 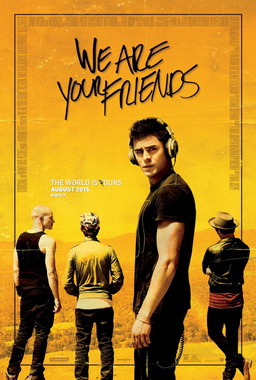 We Are Your Friends takes place in the San Fernando Valley of California, where nice-guy Cole Carter (Zac Efron) lives with his three best friends, Ollie (Shiloh Fernandez), Squirrel (Alex Shaffera) and Mason (Jonny Weston). Cole is an aspiring DJ, who tries to make ends meet by playing at clubs in Los Angeles. One night at a show, Cole gets taken under an older and more established DJ named James’ (Wes Bentley) wing, and James teaches him that he must find his own signature sound in order to find success in the DJing industry.

Soon enough, Cole is using James’ DJ studio in his house, playing at James’ posh parties and getting closer to James’ girlfriend, Sophie (Emily Ratajkowski). This leads to the inevitable love triangle between Cole, James and Sophie.

The characters are very archetypal, and the dynamic between Cole and his three friends is wildly reminiscent of Entourage. Cole is the one getting the big break, while his three less cultured friends tag along making scenes wherever they go.

This movie is no cinematic masterpiece, but it is a feel-good film with catchy beats. EDM lovers will appreciate some of the tracks that are created, especially Cole’s one great track that is played at the end of the movie. Teenagers looking for a charming, yet cliché movie, should look no further than We Are Your Friends.