The Party brings classic cinema technique to the modern day 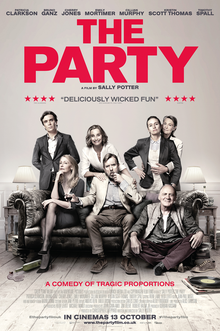 The Party stars Kristin Scott Thomas as Janet, one of the main characters of the film.

In attempt to bring her closest friends together to celebrate her political ascension as Minister of London, Janet, played by Kristin Scott Thomas, embarks on a series of dramatic events which later shadow the true reason for their gathering. Starting off as a sophisticated soiree, it begins to unravel once her guests decide to reveal their deepest secrets in The Party. The movie, filmed in black and white, opens with a foreshadowed scene later revealed as the last scene the audience watches. Thomas is seen opening the door to her home, pulling out a gun directed to the middle of the camera standing outside her door, presumably directed towards someones head.

The first real scene shows Janet cooking in her kitchen while receiving phone calls from acquaintances congratulating her on her political success. A couple of these phone calls are from more than just an acquaintance, but perhaps her lover. Not to mention that Thomas’s character, Janet, is married to Bill, played by Timothy Spall, who sits in the family room with a glass of wine, fiddling with his record player while pondering about god knows what. Director Sally Potter leaves the beginning of the film vague and confusing, leaving her audience frustrated with the task of putting minute pieces together.

The film continues as guests arrive one by one, first April, played by Patricia Clarkson and her soon to-be ex-husband Gottfried, played by Bruno Ganz. Throughout the entirety of the film, Clarkson is depicted as a negatively-nelly, always“expect[ing] the worst of everyone in the name of realism,” she says. Almost every line Clarkson was given was a failed attempt at sly, sarcastic, dry comedy provided the writing and directing of Sally Potter. While the movie is fulfilled with comedic, dramatic tragedies, the film was an hour and eleven minutes of empty chatter of politics, religious and moral beliefs, etc.

The second and third guests to arrive are Martha, played by Cherry Jones, and Jinny played by Emily Mortimer, a lesbian couple whom later reveal that Jinny is not with one, not with two, but is pregnant with three children– triplets. The last guest to arrive is Tom, played by Cillian Murphy, who is found to have some sort of cocaine addiction, an addiction he uses to cope with news he discovered previously that day about the relationship of him and his wife. Tom’s wife was expected to arrive towards dessert, but once Janet’s guest begin to chatter, there ends up being no dinner served at all. The night continues in vague, unintriguing conversation until Bill reveals he has been diagnosed with terminal cancer. This news spurs into deeper meanings of truth which later reveals an even deeper secret. Spall does a tremendous job remaining in character as an elderly man who leaves no apologizes for his actions. Potter’s idea to have Spall continuously mess around with his record player portrayed Spall’s character as a cute grandfather-like figure.

But do not be fooled. This outside demeanour is only a facade to hide the underlying secret of his character. It turns out that Toms wife, Marian, whose character is never revealed was having an affair with Bill in Martha’s “flat,” so they call it, for almost two years!

This tragic turn of events constructs a domino effect of dramatic tragedies, much of which were realistically played out. All in all, the movie was okay, but would not recommend wasting an hour and eleven minutes to watch it again.