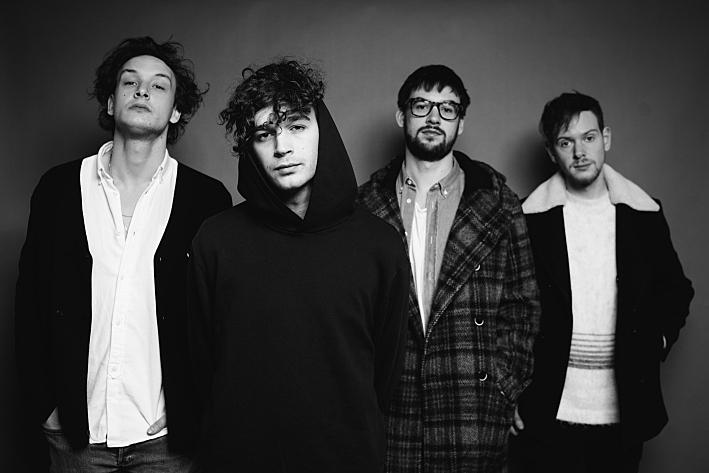 The 1975 band decided to change their image after winning the New Musical Express award of worst band. (Courtesy of thecurrent.org)

The 1975 band decided to change their image after winning the New Musical Express award of worst band.

The 1975 band evolves their image after negative feedback

On June 1, 2015, The 1975 deactivated all of their social media accounts. Shortly after doing this, Matty Healy, their frontman and guitarist, tweeted a cryptic comic that suggested that the band may be breaking up, causing an overwhelming response from their fans. The comic strip read: “Our projected identity must not change only visually but philosophically- how do you do that? Firstly we must reclaim our identity and repossess our control of it… Until then there won’t be any pop music or dancing with long hair.” On June 2, all social media accounts were reactivated with a new pink logo representing The 1975. The new, pink logo acted as their breakaway from the mainstream and the need to fit into standards of being cool. The band consists of Matthew (Matty) Healy (piano, guitar and lead vocals), Adam Hann (guitar), George Daniel (drums), and Ross MacDonald (bass guitar).

On February 26, 2016, The 1975 released their second studio album I Like It When You Sleep, for You Are So Beautiful Yet So Unaware of It. Starting in 2014, and leading into early 2016, frontman Matty Healy released a series of tweets with lyrics from the album. The announcement verifying the album was made in September of 2015.

In 2014, The 1975 won the NME (New Musical Express) award of worst band. Receiving such a negative title woke the band up and they realized that they needed to change. This begun the process for the album I Like It When You Sleep, for You Are So Beautiful Yet So Unaware of it. Healy states that “we can’t simply go on forever- always staying the same, never evolving.” After trashing Justin Bieber’s single “What Do You Mean” for his “meaningless music filled with nothingness”, fans began to make comparisons between their self-titled album and their latest album. The band’s pop influences in their original album are apparent through songs such as “Girls” and “Sex” clearly following the mainstream path of hypersexuality and girls. This album had a huge teenage girl fanbase. However, their newest album reveals a deeper meaning. While there are many songs about love once again such as “A Change of Heart”, it alludes to a deeper meaning. Rather than just a plain love story or a story about sex, “A Change of Heart” is about the stages of falling out of the love with someone: when the infatuation fades and you see someone for who that person really is, rather than who they appeared to be. The heartbreaking meaning of the song is covered by the sweet melodies of the track, making it a beautiful contradiction. Another popular song on the new album is “The Ballad of Me and My Brain”. It’s covered in angelic tones and melodies, but the words are often screamed in a nervous, anxious manner. This song not only describes how he has gone mad in the forced spotlight of fame, but also his dealing with his own mental illness. In just the titles of the tracks on the new album, the audience can clearly see how The 1975’s new songs have a deeper meaning.

This break from the mainstream does not pertain to only The 1975 though. This lean away from the mainstream has been attempted by many bands and artists. Many of these include One Direction, Zayn Malik, and Panic! At The Disco. Bands like One Direction were notoriously known as a boy band with their pop style. However, with Zayn’s sudden leave of the band to make his own music, both musical figures have changed their style. Instead of pop and the boy band image, both groups are now attempting to curve away from the mainstream and focus on a sound that will not only get them a larger, more mature audience, but break them from their box of pop culture. Some pop-punk/rock bands are attempting to get back on track as a rock band after falling under pop influences. Panic! At The Disco and All Time Low are very famous bands that act as a mix between both pop and punk. Both groups have released albums recently with a different sound and style in comparison to their previous albums.

The album was a huge success debuting at number one in both the UK and the US. As compared to the four man band’s previous self titled album in 2013, I Like It When You Sleep, for You Are So Beautiful Yet So Unaware of It serves as proof for the band’s breakaway from just being a mainstream band. In contrast to their previous pop album, this new album has been described as contradictory and Collin Brennan, music critic for Consequence of Sound- online magazine and music blog, went as far as saying that it “[injects] humanity back into music”.

On multiple occasions, Matty Healy has revealed that he is always writing new material, keeping the public on edge. With all of Healy’s ranting about putting meaning into his music, he has definitely served this purpose in I Like It When You Sleep, for You Are So Beautiful Yet So Unaware of It. The public positively responded to the album, putting it on the top charts shortly after its release. Fans fell in love with the album’s contradicting tracks and sounds- many go as far as to call it a masterpiece. Fans say that “The 1975 brought back the idea of a comprehensive album” and critics have described it as “a powerful, groovy, smooth, and overall wonderful album.” A top comment on iTunes describes the album as “a pop album that isn’t afraid to touch upon topics but at the same time, have incredibly catchy tunes. One minute it’s a pop-rock track, suddenly to a R&B song, then an instrumental, and finally transforms to a beautiful acoustic song.”