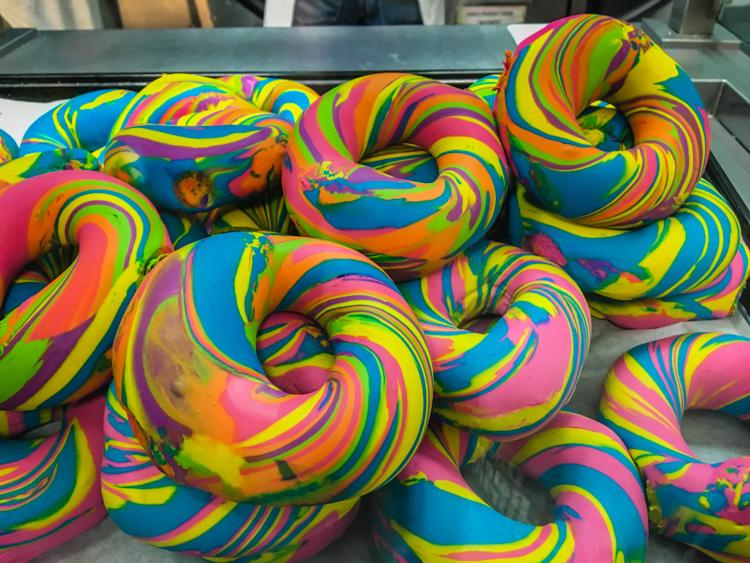 These bagels, originally from The Bagel Store in Brooklyn NY, have taken the internet over by storm.

With endless swirls of color that are then topped off with the perfect combo of Funfetti cream cheese, it is no wonder these rainbow bagels have taken the internet by storm.

The owner of the Bagel Store in Brooklyn NY, Scot Rossillo has been making rainbow bagels for over twenty years now. It was only after Insider Food posted a video depicting the arduous process of creating these bagels however, did they become an internet sensation.

“It [making the rainbow bagels] is an absolute labor of passion and art… A tremendous amount of discipline is required to make the world’s most beautiful bagel,” said Rossillo.

And by no means was Rossillo exaggerating. The process involves first dyeing the dough with various neon food colorings, shaping the dough into mounds, laying each colored mound on top of each other to be flattened, and lastly, cutting the large piece of dough into strips which are then rolled into one colorful string to be baked in the oven.

Contrary to what one might assume from the vivid swirl of colors however, the rainbow bagels still taste like ordinary bagels. The real magic occurs within the toppings. The bagels are typically topped off with Funfetti flavored cream cheese, and then garnished with sprinkles.

Priced at only $3.95 a bagel, these bagels are a huge hit. So much so, that the Bagel Store decided to branch out from their location in NY and ship their bagels nationwide. In addition, many other bakeries have followed suit and put their own unique spin on the traditional rainbow bagel. One such being the Township Bagel and Cafe in Washington Township. The local cafe is now selling their version of the rainbow bagel known as, the Over the Rainbow bagel. Pasquale Leuzzi, who is part owner of the cafe said that unlike the Bagel Store who uses bright, neon colors, their bagels are pastel colored and are hand-rolled, twisted, and boiled. Pasquale also said, “We [They] have house-made confetti cream cheese, and they are a little sweeter than a plain bagel.” According to Pasquale, the Over the Rainbow bagels have been a huge hit with both children and most adults.

One look at these bagels and the hype becomes clear. They photograph great, making them the perfect social media post. Their aesthetic is enough to have these bagels swarming the internet.