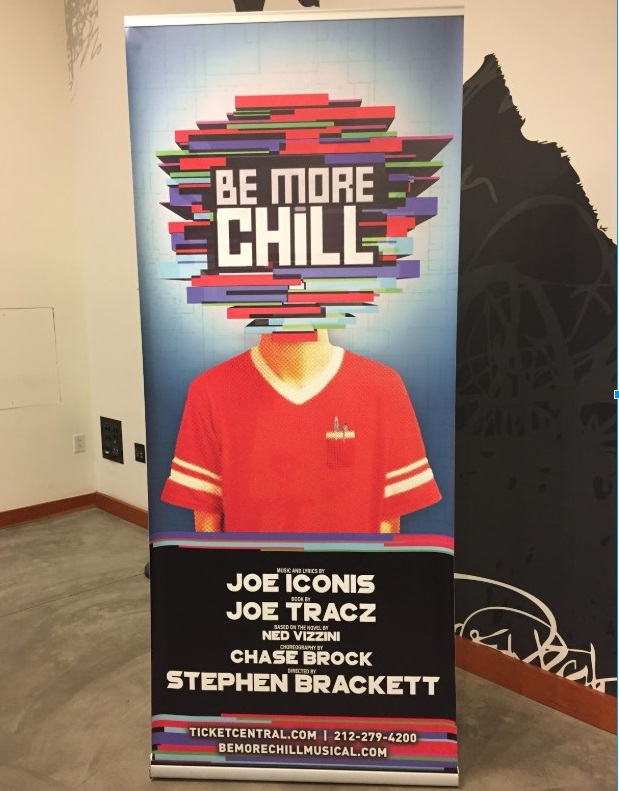 Based on the 2004 novel Be More Chill by Ned Vizzini, the musical of the same title has music and lyrics by Joe Iconis and a book by Joe Tracz. After premiering in 2015 in New Jersey, it reopened off-Broadway in the the Irene Diamond Stage at the Pershing Square Signature Center in New York City on August 9, 2018. The musical follows Jeremy Heere (Will Roland, of Dear Evan Hansen fame) as he takes a literal “chill pill.” In this case, that pill is a supercomputer called a SQUIP that he hopes will make him cool. The musical also follows a cast of other students, including Jeremy’s best friend Michael Mell (portrayed by fan favorite George Salazar) and Christine Canigula (Jeremy’s crush, portrayed by Stephanie Hsu).

Be More Chill has attained an unexpected amount of fame. It went dark after its initial New Jersey run in 2015 and did not reopen until this month. However, the show went viral immediately. It became the second most talked about musical on Tumblr and its original cast recording has been streamed around 100 million times (according to Playbill). The show has an extensive and extremely loyal fanbase, many of whom have been affected in a positive way by the musical and are overjoyed to see it move to an off-Broadway theater.

One of the main reasons that Be More Chill has become so popular is because of its accurate portrayal of mental illness. One of the most well known songs from the musical is “Michael in the Bathroom,” in which Michael has a panic attack in the bathroom during a Halloween Party. In “Be More Chill – Part 2,” the SQUIP makes Jeremy repeat after him and sing that “everything about [him] makes [him] want to die.” And in Be More Chill’s new upgraded act one finale (“Geek, Loser, or Whatever”)  Jeremy sings about the loneliness he’s been feeling for years.

In addition to having realistic mental illness representation, the musical is full of a diverse and interesting cast of characters for teenagers to relate to. Despite Be More Chill’s fantastical plot, is still centered in a relatable high school experience.

When asked by members of the press how he felt about the musical impacting so many people, Joe Iconis said that “it’s really amazing, it’s a really incredible thing and I’m so thrilled. It’s been life changing.”