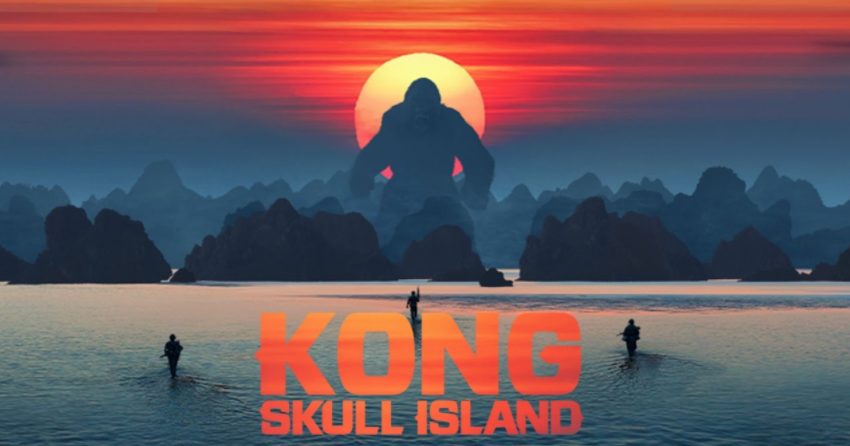 The film Kong: Skull Island’s combination between awesome action sequences and a fresh King Kong allow for a fun film for all ages. Although an overall good action movie, the film is comprised of mostly two- dimensional characters and a plot I could have written on my computer on a Tuesday night.

The film puts us in 1970s America weeks after losing the Vietnam War inside a busy senator’s office. We are introduced to two marine biologists, Bill Randa (John Goodman) and Houston Brooks (Corey Hawkins), that are pleading with a senator to allow their corporation Monarch to explore an uncharted island in the pacific, Skull Island. After finally receiving the okay and a military export, the two travel to find the special tracker James Conrad (Tom Hiddleston).

The filmmakers than take us to a military base in Vietnam as General Preston Packard (Samuel L. Jackson) and his group are packing up to go home as they receive a call to be the exports for the exploration. Although most of the soldiers are depressed, Packard is excited due to his thirst for battle.

Eventually the whole team of explorers, military, trackers, and Mason Weaver a war photographer (Brie Larson) arrive at Skull Island with a not-so-gentle greeting from Kong himself. The survivors must cross the island in three days to get to the spot where they will be picked up while tackling out-of-this-world monsters.

As a pure film, this movie is disappointing. With an excellent cast I expected this film not to just be an average action film, but a leader into a greater franchise. It turned out to be full of action with great Kong scenes, which isn’t bad for a middle-of-march action movie.

Although I might sound like I did not enjoy this film, I had a blast watching it. As a King Kong fan, I loved the fights between him and underground Skull creatures. The action was amazing, and I could find myself more invested in King Kong than the human characters. The computer effects, CGI, brought the island to life with a beautiful forest, marvelous creatures, and a larger than life protagonist.

Unlike the human characters, Kong has an almost complete character arc.  Throughout the film we find out the reasons Kong is so angry at the humans and his relationship to the island, an unusual turn for the ape as most interpretations of him is an ape in love with a girl.

Overall the filmmakers created a fun action flick for the whole family to enjoy on a Friday night. The visuals are stunning and King Kong is great, but a lack of narrative and character development makes this film a touch of a disappointment.

Overall I give this film 2.5 out of five stars and recommend it for any teenage kid that wants to have two hours of pure action and entertainment.