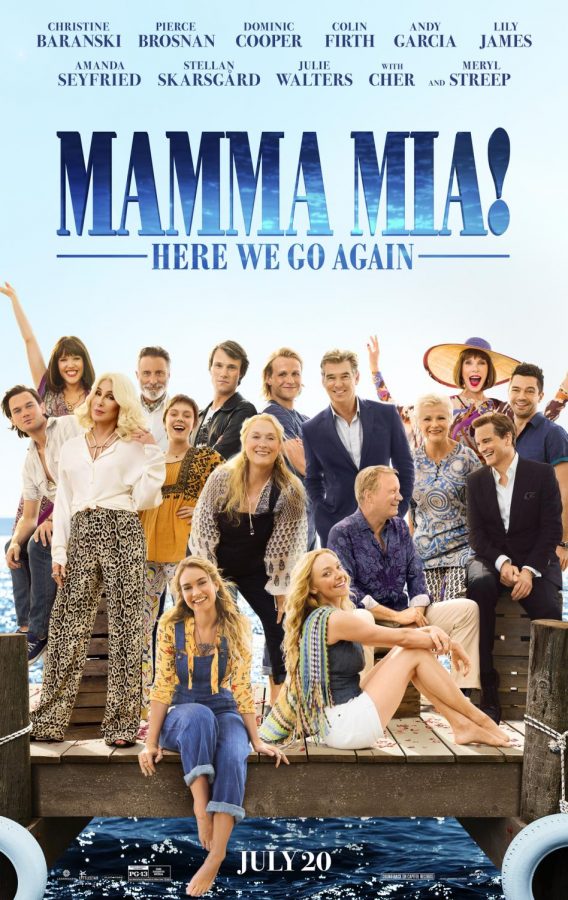 Exactly 10 years after Mamma Mia! was released, its sequel Mamma Mia! Here We Go Again has hit theaters. The story takes it back to 1979, as young Donna (played by Lily James) journeys to Greece, along the way meeting, Harry (Hugh Skinner), Bill (Josh Dylan), and Sam (Jeremy Irvine)–her soon-to-be daughter’s dads. As the movie switches to present day, Sophie (played by Amanda Seyfried) plans to honor her mother Donna (previously played by Meryl Streep,) who died a year ago, by reopening their once hectic, but beloved hotel. The flashbacks definitely fill a void in any die hard Mamma Mia! fans’ heart, however I expected more from the present day point of view.

The new upbeat music sets an exciting tone for the film. From the first song when Donna breaks out into “When I Kissed The Teacher” for her graduation speech to the scene where Bill and Donna playfully sing “Why Did It Have To Be Me”, the music helps characterize young Donna as a carefree, adventure-going woman. As Donna and her two best friends Rosie (played by Alexa Davies) and Tanya (played by Jessica Keenan Wynn) finally belt out into the iconic song “Mamma Mia”, the whole essence of Donna’s young character feels perfectly complete.

As for the present day scenes, there wasn’t much of a plot line, and the lack of one that was there seemed awfully too cheesy. Sophie had been planning a reopening of her mother’s hotel. In the midst of this, her husband, Sky, is away taking business classes in order to better the hotel. The back-and- forth plot between the past and present day becomes unnecessary. Although it wasn’t too hard to follow, a more in depth story of Donna’s past, without the present day, seems like a much better plot line for the movie.

In the last scene all the past and present characters come together as they sing “Super Trouper”, another iconic song from the first movie. Showing each of the characters with their past self makes for a confusing and unrealistic scene. The scene could have been edited to make past characters look as if they were from the past, rather than having them clearly interacting with their present counterparts.

Overall, the present day parts of Mamma Mia! Here We Go Again was your typical movie sequel, following up on the characters lives. However, the flashbacks were definitely an interesting angle that I wish were explored more.