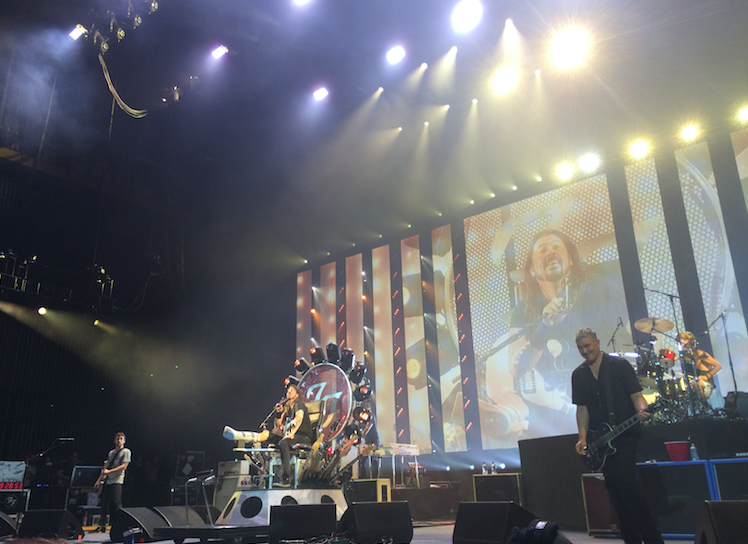 When Dave Grohl broke his leg during a show in Sweden last month, many thought that the band’s North American tour dates during July would be canceled. Weeks passed with no announcement regarding the dates in question. When the band tweeted that its twentieth anniversary blowout show at RFK Stadium in Washington D.C. was still happening, many fans’ worst fears were put to rest; the remainder of the North American tour dates would remain as scheduled.

At RFK, Grohl debuted his “iron throne”; his huge Game of Thrones inspired motorized chair was adorned with a smoke machine, lights, guitar necks and the Foo Fighters’ logo. In Camden at the Susquehanna Bank Center, the crowd was excited to see the band and Grohl’s throne in the flesh. When the band took the stage at 8:35, fans expected to hear a typical set opener like “All My Life” or “Something From Nothing.” Instead, the band played the typical set closer, “Everlong.” The band started the show with the hits to get the crowd warmed up. “Monkey Wrench,” Learn to Fly” and “The Pretender” filled the crowd with energy; the night was off to a good start.

During “Big Me,” a track off the band’s first record, Grohl’s throne moved to the front of the catwalk. He greeted the crowd, thanked everyone for coming out to see them perform, and told the story of his fall from the stage in Sweden. “It could be worse,” Grohl said. “I could be home right now watching an episode of the Kardashians.”

After the band performed “Walk,” Grohl spotted a sign from the pit. “My name is Zeppelin, and all I want for Christmas is Foo front seats,” the sign said. Grohl asked Zeppelin and Zeppelin’s family to watch the remainder of the show from the side of the stage, next to Grohl’s mother. Grohl introduced his band: Chris Shiflett on lead guitar, Nate Mendel on bass, Rami Jaffee on keyboards (Grohl called him the only real musician in the band), Pat Smear on rhythm guitar, and Taylor Hawkins on drums. The band joked around with each other and seemed genuinely happy to be on the stage together. Hawkins took over the lead vocals for “Cold Day In The Sun,” a track off the band’s fifth album, In Your Honor.

During the middle part of the set, Grohl left his throne and used crutches to make his way to a waiting plain black chair at the end of the catwalk. Smear and Shiflett followed Growl down the catwalk, both playing acoustic guitars. The remaining members of the band left the stage while the acoustic portion of the set commenced. Grohl said that it would not feel right to perform a song like “My Hero” from an elaborate throne. The three band members led the crowd in acoustic renditions of “My Hero” and “Times Like These.”

When Hawkins, Mendel and Jaffee returned to the stage, Mendel started to play the well-known baseline of Queen and David Bowie’s “Under Pressure.” “You can’t stop the ‘Under Pressure,’” Grohl said, clearly excited to perform a cover song. Hawkins seemed particularly excited, as Queen is Hawkins’ all-time favorite band. Hawkins performed the vocals for Freddie Mercury’s parts, and Grohl did vocals for Bowie’s parts. After the band finished “Under Pressure,” Grohl asked the crowd if they wanted to hear more cover songs. This led to a few cheers. He then asked if they wanted to hear more Foo Fighters songs. The crowd went crazy, and the band rocked out on its 2002 hit, “All My Life.”

As the time neared 11:00, Grohl was not ready to end the show. He asked his tour manager, Gus if they can break curfew. When Gus gave the band a thumbs up, the band performed some covers. Hawkins took the lead vocals once again for a cover of The Faces song, “Stay With Me,” and Grohl returned to vocals for AC/DC’s “Let There Be Rock.” The band finished the show with a singalong of “Best of You.” Foo Fighters return to the Susquehanna Bank Center on July 13 for a second night, one which can only parallel the great show they put on this past performance.