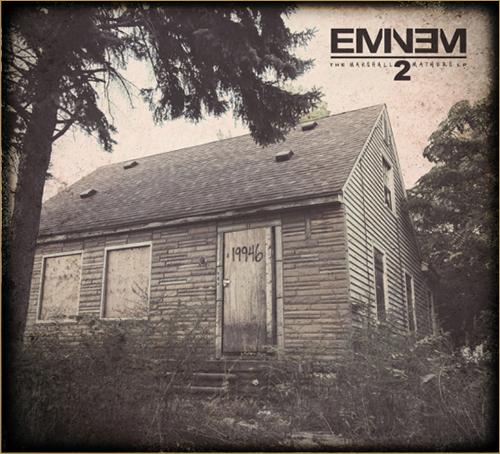 Detroit-based rapper Eminem has returned to hip-hop with his eighth studio album, The Marshall Mathers LP 2. The album is essentially a reflection on his long, illustrious career, and it is the sequel to his masterpiece, the first Marshall Mathers LP (2000). The album is executive produced by Dr. Dre and Rick Rubin, and also features production from S1, StreetRunner, DJ Khalil, Alex da Kid, Eminem himself, and more. The album also features guest artists Skylar Grey, Rihanna, Kendrick Lamar, and Nate Ruess.

To begin, Eminem is rapping with the same intensity he had on Recovery (2010)–this time, however, his bars don’t feel nearly as forced. While he has aged and does not carry the same passion he once had on the original Marshall Mathers LP, it is reassuring to hear Eminem still having fun with rapping.

Eminem raps about many different topics on the tape, but primarily, most of the album’s songs relate back to his previous records. The opening track “Bad Guy” is the sequel to one of Eminem’s most popular songs “Stan”, and it is told from the point of view of Stan’s little brother Matthew, who is vengeful of his older brother’s death in “Stan”. While the first half of the song which tells the story of Matthew is a tad corny at times because it is basically just a retelling of Stan’s story, Eminem spits an extremely emotional verse in which he dissects all of his insecurities and realizes he must do justice to his fans by releasing another album. “Rhyme or Reason” is one of the many songs where Eminem speaks on a multitude of topics, primarily his father who he never met. He sounds rejuvenated–rapgenius.com calls the song a “lyrical hate spew,” which sums up the song accurately. Eminem carries his ferocity over to songs like “So Much Better”, a song in which he contemplates life without rap, and “Evil Twin”, the album’s finale.

The album’s production is definitely a strong point, as expected with producers Dr. Dre and Rick Rubin, who Eminem has worked with his entire career. However, like on his last effort, Recovery (2010), some songs like “The Monster” featuring Rihanna and “combine cheesy, cliché lyrics with fluffy, pop instrumentals in an effort to appeal to the mainstream and get radio play. Eminem’s use of rock instrumentals on songs “Survival”, and “Berzerk”, is another attempt to stretch his fan base; but Eminem continues to sound awkward over many heavy rock beats. Overall, songs like “Rhyme or Reason” with The Zombies’s “Time of the Season” sample and “So Far…” with the Joe Walsh’s “Life’s Been Good” sample combine classic rock samples with just enough hip-hop influence to compliment Eminem’s style, and ultimately lead to the album’s positive production.

As for lyrics, Eminem’s strong point has always been his wordplay, but recently, he has lacked substance to rhyme about. While, for the most part, Eminem focuses on a single topic per song, often times he resorts to childish and unconnected rhymes, like on “So Far..” when he rants about fans asking him for autographs while he uses a McDonald’s bathroom and about two women catching him with a “finger still up one of [his] nostrils.” While Eminem openly admits he is a 41-year-old with the mind of a teenager, this is not an excuse for the absurd amount of poop puns on this tape; ultimately, the silly puns on the tape make it difficult to take the album genuinely. Despite all of this, however, the tape does include its fair share of double entendres and wordplay to appease hardcore Eminem fans.

The Marshall Mathers LP 2 is nothing like the first, like many would have assumed. Eminem said in an interview with Rolling Stone that the album would be less similar to the first, and “more about the nostalgia [of it].” What fans got exemplified what Mathers said it would be for the most part: the album’s beats fit Eminem’s flow well and Slim Shady seemed to genuinely enjoy rapping again. However, with some noticeable attempts to appeal to the mainstream, as well as numerous immature, aimless puns, the album cannot compare to the first. The album may be an improvement over his last effort Recovery, but at best The Marshall Mathers LP 2 is a mediocre attempt to revive the fading career of one of hip-hop’s all-time greats.