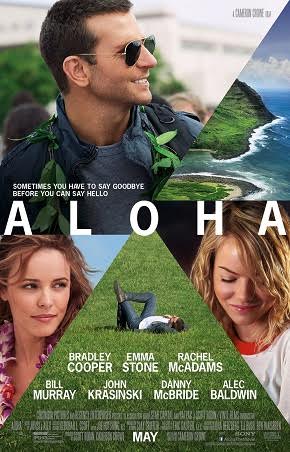 Cameron Crowe’s Aloha fails to impress its audience since its release date on May, 29.

The movie follows the story of a confused soldier, Brian Gilcrest (Bradley Cooper), who has made many mistakes in his career and personal life. In 2008, a big business gains control over the military causing him to leave and become an independent contractor.  However, after a near death experience in Kabul, Gilcrest decides to return to the force and is assigned a mission in Hawaii. Under the supervision of Allison Ng (Emma Stone), Gilcrest must convince the King of the Nation of Hawaii to give a twenty-minute blessing ceremony for a new Air force Pedestrian Gate. While it takes a quite a bit of negotiating, the King ultimately agrees to bless the new gate.  Conveniently enough, Hawaii is also the state where his ex girlfriend, Tracy (Rachel McAdams), lives with her husband, John “Woody” Woodside (John Krasinski), and their two children. The whole movie follows Gilcrest’s budding relationship with Ng while Tracy’s marriage with Woodside begins to fall apart.

Bradley Cooper (of American Sniper, Silver Lining and American Hustle fame) does an excellent job portraying Gilcrest.  Cooper is superb in showing how torn Gilcrest is between which woman he loves and what he wants to do with his life. Cooper shows the evolution of his character from someone who is greatly confused to a person knowing exactly what he wants to do in life and whom he wants to be with.

While the acting in this film was flawless, the plot could use some work.  It seems as though the entire film is dedicated to Gilcrest choosing between which woman he loves and nothing more. The movie needs a broader, more engaging storyline beyond the overused cliché of “which woman do I love.”

Ultimately, Aloha is not a very well thought out film. Unfortunately, the plot lacks substance to hold the attention of its audience.

While there are a few scenes in this film that may make some people smile, they are not enough to make up for the lack of entertainment that the rest of the film has to offer.