Women in Music: Women are overcoming adversity, gaining ground, and spreading positivity in the music industry 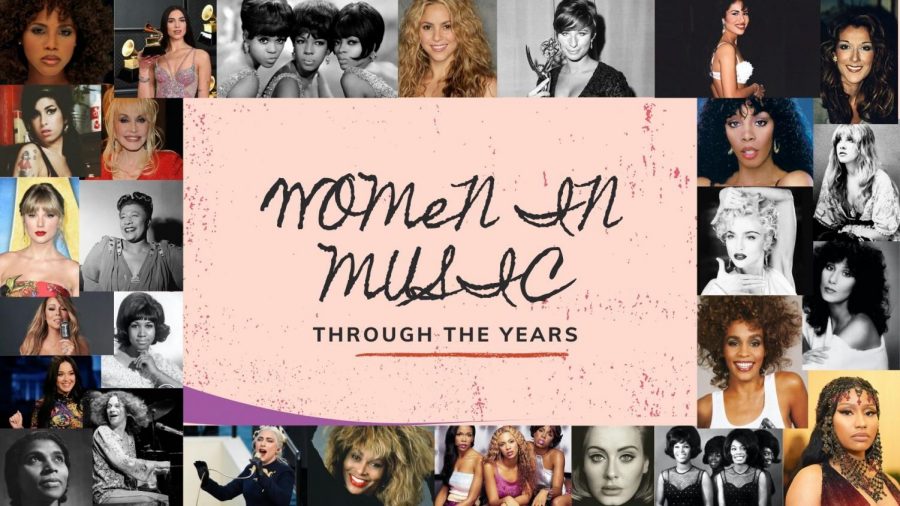 Women have faced adversity in the music industry throughout the years

With so many female voices on the radio, it is easy to forget the gender discrimination and even abuse of women that exists in the music industry and that, up until recently, female artists’ careers were generally run by men. Music has existed for centuries in cultures all over the world, yet women are still breaking barriers and fighting to gain equal rights in this industry.
Careers in music were thought to be only suitable for men up until the 20th century. Before this time, if a woman wanted to indulge a passion for music, she would have to do it as a nun or a music teacher. Even sisters and wives of famous 19th composers did not receive support from their families to become musicians or composers.
In the 1950’s, 60’s and 70’s in America, many popular singers were women. While many had successful careers, they were judged on their appearances, they were backed up by bands made up of men, and they sang songs written by men. With the production of the popular dance hit, The Loco-motion, however, in 1962, Carole King broke new ground by becoming the first woman in popular American music to be credited with composing, arranging and conducting an album. Yet, even after this release, Carole King’s writing partner, her husband Gerry Goffin, continued to receive more compensation and credit for their cowritten songs.

In the 1970’s, Carole King did, however, break another glass ceiling and pave the way for singer songwriters. Her 1971 album Tapestry, for which she wrote and sang all of the songs, remained on the Billboard 200 chart for 4 years and is ranked on Rolling Stone’s list of the 500 greatest albums of all time. In one song, King sang about being a “natural” woman, as opposed to a female trying to live up to a certain false image. King’s appearance with her natural curly hair and little makeup also helped women not feel obligated to conform to societal expectations.
The same year that Carole King released Tapestry, Carly Simon sang “You’re so Vain,” speaking assertively to a male.
In the 1970’s and 1980’s, several women gained fame as rock singers and songwriters and helped dissolve certain gender biases. Stevie Nicks joined Fleetwood Mac in 1975 and helped produce Rumours, one of the best selling albums of all time. In the 1980’s, more women became prominent lead singers in rock bands. Pat Benatar, Joan Jett, and Debbie Harry as well as Ann and Nancy Wilson, who began as lead singers with Heart in the 1970s and continued through the 1980’s helped evolve society’s images of women. These women were confident, assertive, feisty, and forceful. Annie Lennox also pushed social norms with her androgynous appearance in a suit and tie and short, spiked hair.

The reemergence of Tina Turner in the mid 1980’s created another female role model who symbolized how far women’s roles in America had come since the 1960’s. In the 1960’s Tina was part of a musical duo with her then husband Ike Turner. Ike demanded complete control over Tina’s career, chose the stage name “Tina” for her, and physically abused her. In the 1980’s, Tina gained popularity as a solo artist. Although in her mid-40’s at the time, her short skirts, leather outfits, and dramatic wigs coupled with her edgy voice made her a music icon.
Typically in the 1980’s, record labels would dictate the style and concept of an album for the performers. Madonna bucked that system by becoming the first woman to have complete control over her music. She also founded her own record label. Throughout her career, she continually transformed her appearance, influencing fashion and always freely expressing her sexuality and fierceness at once. She was independent, making her own artistic decisions that included making music videos that depicting stories with diverse characters including members of the LGBTQ community and also elaborate theatrical concerts with multiple sets and costume changes.
Another female artist, popular during the 80’s as well as before and after the decade, Cher, has also used sexuality to push gender barriers while making clear that women do not have to depend on men. When her mother advised her to marry a rich man, Cher famously said, “Mom, I am a rich man.”

Today, female artists such as Taylor Swift, Beyoncé, Lady Gaga, Billie Eilish, Dua Lipa, Lizzo, and Demi Lovato are working to push gender norms and trying to dissolve the discrimination that still exists not only in the industry but against women everywhere. Each of these singer songwriters not only maintains an image of independence, not backing down to males who might have attempted to control their careers, but they fight against male abuse and they preach positivity in their song lyrics.

Rather than taking orders from a male advisor as is traditional in the industry, Taylor Swift maintains strict control over her public image and also social media content. She is either the exclusive writer or cowriter on all of her songs. She has succeeded in producing country music, pop, hip-hop, EDM, and folk music. She has stood up for herself and other female artists in the past, having sued a radio DJ who groped her. She also reportedly donated money to pay for female artist Kesha’s legal fees in a case against a male sexual and emotional abuser who was also Kesha’s music producer. Taylor Swift’s song, “The Man” points out that many male behaviors would never be tolerated if a woman acted similarly. Swift’s video demonstrates that society overlooks male self-centered behavior and does not scrutinize men for their appearance.

Beyoncé likewise maintains creative control over her videos and performances. As a member of Destiny’s Child, she sang about strong, independent women and not putting up with men who cheat. She tries to educate the public about feminism and also the Black Lives Matter movement. Beyoncé’s “Black Parade” song and video won the Grammy for the best R & B performance in 2021. In 2011, Beyoncé fired her manager, who was her father. The move proved to be a shrewd business maneuver because her career as soared and she currently holds the record for the most Grammys by a female artist with 28.

Today, many female artists urge women to love their bodies without feeling the need to conform to expectations. Lizzo promotes acceptance of one’s body by wearing tight, revealing outfits and also utilizing plus-size female dancers. Lizzo’s lyrics also celebrate herself unapologetically, feeling comfortable in her own skin. Billie Eilish also promotes independence from gender norms in both her clothes and her music. She utilizes a distinctively soft style of singing and often wears oversized clothes that add to the intense effect as she sings about love, depression, climate, crime among other topics.

Likewise, Dua Lipa emboldens women through the lyrics in “New Rules” and “IDGAF.” The lyrics encourage women to take control of their emotions and decisions and not become dependent on boyfriends, etc. Dua Lipa wears a masculine looking suit in the IDGAF video, expressing strength, independence and rejection of her boyfriend’s behavior.

More female artists are rejecting gender norms and promoting positivity in women. Demi Lovato, for instance, sings “I Love Me,” referring to the fact that she accepts her body regardless of what images she may see in a magazine.
Another notable artist, Lady Gaga, who is a singer-songwriter, record and film producer, director, actress, businesswoman, and philanthropist, promotes LGBTQ acceptance in “Born this Way.” Like many female artists in the music industry, Lady Gaga suffered a sexual assault years ago. Nevertheless, she spreads messages of resilience and self-acceptance. Pointing out that women should not cling to societal perceptions of beauty, she has said, “Whether I’m wearing lots of makeup or no makeup, I’m always the same person inside.”