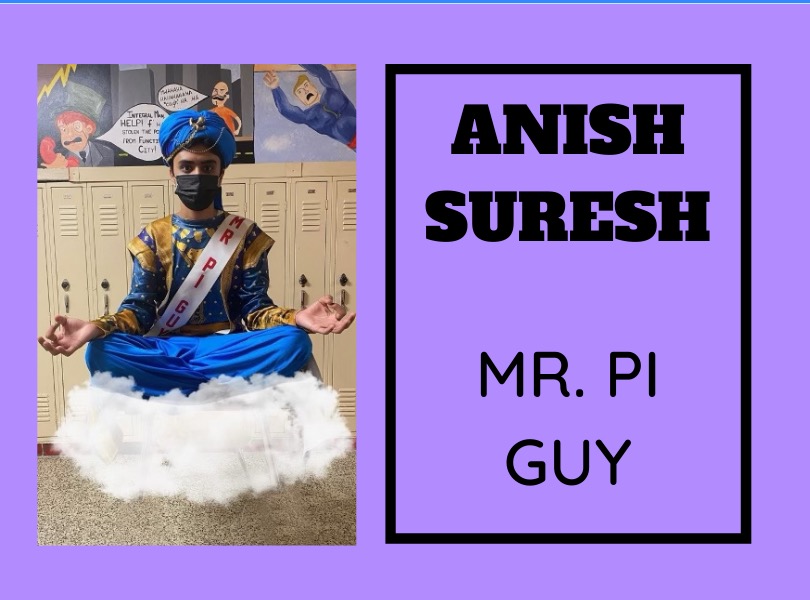 Anish Suresh (’21) is ready to amaze the East community with his one of a kind act.

Anish Suresh (‘21), is quite involved in the East community. Currently the Mr. East contestant is president of Math club and National English Honors society, as well as his involvement in Science National Honors Society and badminton club. In 2018, Suresh became known as “The Pi Guy,” when freshman year, he recited 500 values of Pi, later on memorizing the periodic table and learning how to solve a rubik’s cube.
This year, Suresh’s performance is solving a rubik’s cube blindfolded, which was inspired by his 10th grade coffeehouse performance, where he solved 2×2, 3×3, and 4×4 rubik’s cubes. This year, he will be performing as “The Genie” to partake in the Disney theme, who will grant Aladdin 3 rubik’s cube related questions. Additionally, he has been practicing how to solve a rubik’s cube blindfolded, and timing himself.
Suresh’s rubik’s cube journey started in 2015 originally, when he was inspired by a classmate who solved it. Since then he has competed in various competitions, but did not have experience with solving a rubik’s cube blindfolded until recently.
Suresh says that he is most excited for the dance this year, because “this year, sitting at home not really doing too much makes dancing with other seniors very fun and uplifting” .
He also says that under the circumstances that seniors had school this year, he thought that participating in this annual contest would be a great opportunity to get involved as a nice way to end off senior year.
Though Suresh is confident in his ability to take the title, he anticipates that he may have competition, specifically, with Tyler Semon who is showcasing his talent in martial arts.
Suresh thinks that his talent sets him apart from other contestants because of the uniqueness of his performance.
“I think that my performance is more hands-on, and mentally [demanding], [whereas] other contestants are doing something physical,” he says.
Overall, Suresh says that he thinks his performance is very personalized, and he is certain that no other contestant will showcase the rubik’s cube talent, making him very confident in this year’s show.