A review of “Making a Murder: Part 2” 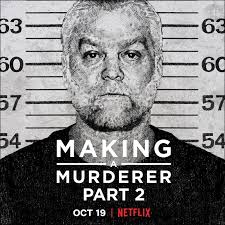 "Making a Murder," the widely-popular Netflix documentary, returned for its second installment on October 19.

When Making a Murderer was released by Netflix in 2015, the true crime community was immediately engrossed. Making a Murderer is a ten hour documentary series that revisited Steven Avery and Brendan Dassey’s 2007 convictions for the rape and murder of Teresa Halbach. The first season argued that it was not in fact Steven Avery and Brendan Dassey who commited the crimes, and that police had planted DNA and forced confessions. The series brought national attention to the case and interested many newcomers into true crime. Unfortunately,  Making a Murderer Part 2, which was released October 19, 2018, was a slow and painful season.

I personally thought the season started off pretty nicely. We were introduced to Brendan Dassey’s new lawyers, Laura Nirider and Steven A. Drizin, along with Steven Avery’s new lawyer Kathleen Zellner, who has gotten 19 wrongfully convicted men released. Zellner basically became the protagonist of Part 2, chiming in about Dassey’s case as well as Avery’s and continuing her unwavering belief in their innocence.

She also spent hours of the season dedicated to pulling apart the prosecution’s argument from Avery’s 2007 trial. She replicates blood spatters and retests DNA samples. She finds incongruities and missing evidence that paint a much different picture of the murder than the one that put Avery and Dassey behind bars.

My issue with this season, however, is that Zellner, Nirider, and Drizin did not have enough screen time. They had around 50 percent of it, but when the other 50 percent comprised of scenes that should have been cut minutes earlier or the Avery and Dassey families saying the same two things in dozens of different ways, the lawyers are really carrying the show.

As someone who loves Forensic Files and a good conspiracy theory, I would have adored Making a Murderer Part 2 if not for how unnecessarily long it was. I enjoyed learning the difference between blood and saliva DNA, I enjoyed the blood spatter recreation and the copious experts consulted. I did not enjoy how much the show was padded out. I watch true crime to see a glimpse into the darkest parts of humanity, not because I want to see five minutes of someone putting curlers into someone else’s hair or ten establishing shots of a stove and dinner table just so I can then watch them talk for another five minutes.

The biggest problem I have with Part 2 is I do not think it should exist, at least not yet. The first part put the case so much into the limelight that nothing the second part shared was new news. People have known that Brendan Dassey’s appeal options are exhausted since last June when the Supreme Court refused to hear his case. The first season’s popularity ended up being the second’s undoing.

Additionally, having another season before anything is actually wrapped up is a huge disservice to Teresa Halbach’s memory and her grieving family. To me, it just seems like a cash grab based on a case that most people who watch it have been following anyway. Most true crime has to walk a fine line to find a balance between being informative in the details while still not in bad taste. Though I loved the lawyers and the in-depth forensics, I thought that Making a Murderer Part 2 jumped right over the side of that line in the name of conspiracy.