A review of Ariana Grande’s single “thank u, next” 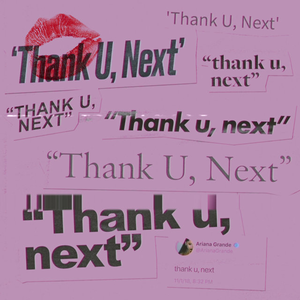 In Ariana Grande's new single "thank u, next" she recalls many of her past relationships.

In the beginning of October, Ariana Grande and Pete Davidson split after months of engagement.

Inspired by her recent breakup with Davidson, Grande released the single “thank u, next” where she details what she has learned from heartbreak in her life.

She starts off the song by name-dropping her last four famous boyfriends. The first one is Big Sean, and Grande says that she “thought [she’d] end up with Sean, but it wasn’t a match”. Then she talks about Ricky Alvarez, whom she dated in 2015, and saying how she “wrote some songs about Ricky, now [she looks] back and [laughs]”. As expected by everyone, she mentions Pete Davidson next. Even though the breakup has been a bit messy and Grande has taken to Twitter to share her feelings, she still has positive things to say, explaining how she “even almost got married, and for Pete [she’s] so thankful”. Lastly, Grande mentions Mac Miller who died from a drug overdose back in September, saying that she “[wishes she] could say ‘Thank You’ to Malcolm, ‘cause he was an angel”.

After a breakup, especially one like Grande’s with Davidson, it can be difficult to find the positives. However, “thank u, next” takes a different approach. Instead of talking about her sadness, Grande explains to listeners how from these hard times, she learned about love, pain and patience, helping her to grow into a better person.

At first, the title “thank u, next” can sound a bit harsh, as if she is just moving through men without caring. But if you listen to the rest of the song, it is clear that this isn’t the case. In the chorus, she even says how thankful she is for her exes, even if they did cause her pain.

As a role model for many young women, Grande spreads a great message in this song by not only singing about the how she has found positives in some of her rough situations, but also how important it is to take care of yourself. In the second verse, Grande mentions her newest relationship, and how this one will last since, instead of being with someone else, she’s building a relationship with herself and learning to love it.

While the lyrics are poetic and beautiful, they are only half of what makes this song great. In addition to the words and incredible vocals, as per usual with Grande, the production of the song is clean and the melody is infectious.

“thank u, next” is constructed in a very similar way to other Grande songs. It starts off with a simple keyboard melody, then brings in the beat once she starts singing. As she moves into the verse, more layers of beat and keyboard are added smoothly into the mix, making the transition through the song natural to listen to.