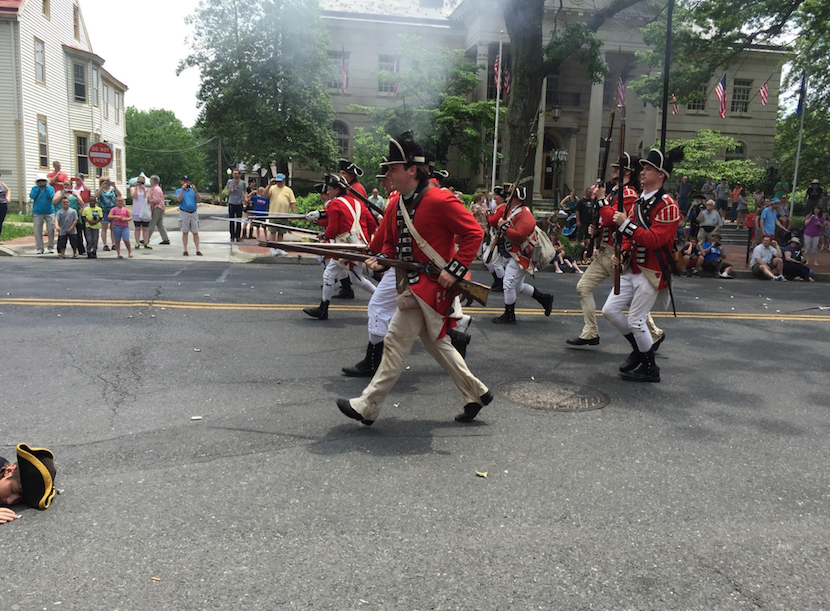 Soldiers fire their muskets at the Revolutionary War reenactment hosted by the Indian King Tavern.

The boom of musket fire rings viewers’ eardrums. The air is thick with smoke and the smell of musket fire drills a hole through your nose. In the background, the sound of drums and trumpets play.

On Saturday, June 4, The Friends of the Indian King Tavern hosted its fourth annual “Skirmish on the Highway.” This reenactment was made possible with the volunteer members of the Second Pennsylvania/43rd of Foot Regiment.

President of the regiment, Paul Loane has been an active participant in the regiment and other historical war reenactments for 44 years.

“It is a real experiential thing. You get to smell the smells and feel the uniforms. It gives a whole different dimension than just reading a book,” said Loane who has performed for names such as Bill Clinton and George Bush and has been all over the world performing and educating.

The event started early in the morning with tours of the historic Indian King Tavern museum which has been standing for over 270 years. A docent for the museum explained that the tavern was actually where government officials met while Haddonfield and the surrounding area were under siege.

Around the tavern, there were different demonstrations going on such as cooking and hand weaving baskets. All demonstrators were dressed in time period clothing, which added to the effect of being taken back in time.

“It is really exciting to be a part of this event. The museum has costumes that you can choose from when helping out with different events,” said Danielle Barry, Haddonfield resident and volunteer for the tavern. Barry was demonstrating how to make purple heart pins by hand.

The newly formed state-government met three times in the Indian King Tavern in 1777. Here, they passed laws regarding government elections, courts, townships and the struggle to fight the British.

In September 1777, Haddonfield was a major war zone. Cat and mouse skirmishes were taking place, explained Michele Sbaro of the NJ State Parks Service. Sbaro works at the tavern full time. Sbaro explained that the event is held around this time not only because of nice weather, but also because of the historic battle that was able to push the British out on June 20, 1778.

Down the street from the Tavern is the Happy Hippo Toy Store. Owner, Scott Boren jokingly calls himself the official sutler, or a civilian with a shop on an army post. Boren was mentioning the reenactment to customers of his store all throughout the day.

The reenactment took place on Kings Highway, which was temporarily shut down for the event. A little after 1 p.m., drums could be heard and the sounds of boots marching drew viewers’ attention. The British, also known as the red coats came up the street with muskets in hand. To the opposite end of the street, the Colonial soldiers stood getting ready.

After a few minutes of stand still, the orders to fire were barked. The first shot of the day was fired by the colonists. Although the reenactors were just firing blanks, the sound of a musket being shot was as real as can be.

A few more volleys of gunfire led to the colonists advancing and the British retreating. Just as it seemed to be over, the red coats were back with reinforcements. The shooting became more intense, with the air filled with smoke and ear drums ringing. Soldiers started to fall to the ground as they were picked off. One by one, the British started to literally fall and in the end, the colonists ended up breaking the British siege.

“After the fighting, we all hang out at the tavern and have a nice meal together,” said Loane.

This reenactment is not the only time the experience of the Revolutionary War can be felt at the Indian King Tavern. On July 4, a reading of the Declaration of Independence will be held with a parade and troops present.