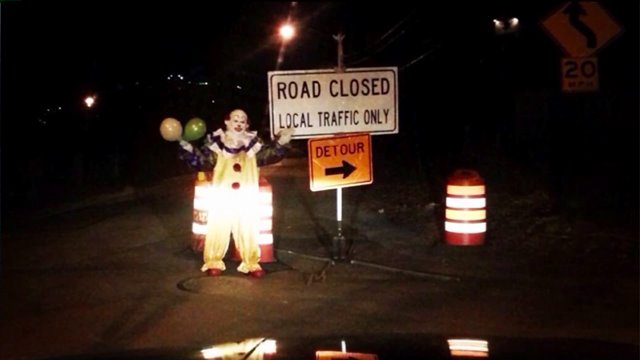 These creepy clowns are lingering in the weirdest of places, from deep in the woods to the tops of billboards. The issue seems to be growing out of hand.

The “Clown Clan”: A Creepy Joke, or a New Cult?

A 'clown-like" person was spotted walking their dog near Beck Middle School.

On October 7, 2016, students at Henry C. Beck Middle School in Cherry Hill reported a ‘clown-like person’ walking their dog on school grounds. The school was then forced to go into a lockout, although Director of Security and the Cherry Hill Police Department later said that there was no legitimate threat against the students’ safety.

Now it seems that this “Clown Clan” has reached Cherry Hill. This supposed sighting on Beck school grounds came on the heels of a threatening online message warning them of impending clown presence.  On October 6, 2016 “It was brought to [the town’s] attention that here is a post on an Instagram social media account that vaguely references clowns visiting our school,” said Sidney Dawson, principal of Beck Middle School. This post put many on high alert that Beck might have clowns knocking at its front door the following day.

Then, on October 7, 2016, a pedestrian was walking a dog on Beck school grounds while suspiciously dressed. “Today, our school received a report of a suspicious person walking their dog near the school grounds. While many people walk near our school regularly, this person’s clothing appeared “clown-like,” and therefore appeared suspicious,” said Dawson. However, in actuality the walker was not, in fact, a member of the Clown Clan.

Incidents like these demonstrate that although the threat of ‘clown attacks’ is not necessarily always a legitimate danger, clowns continue to inspire fear and hysteria as sightings and public outcry travel through Cherry Hill and beyond. Although many have expressed hope that the hype will soon die down and clowns will not continue to be a representation of panic and paranoia in our day-to-day lives, parents and students who continue to be concerned can keep each other safe from this potential threat by staying cautious, always traveling in groups, and being careful during public events.