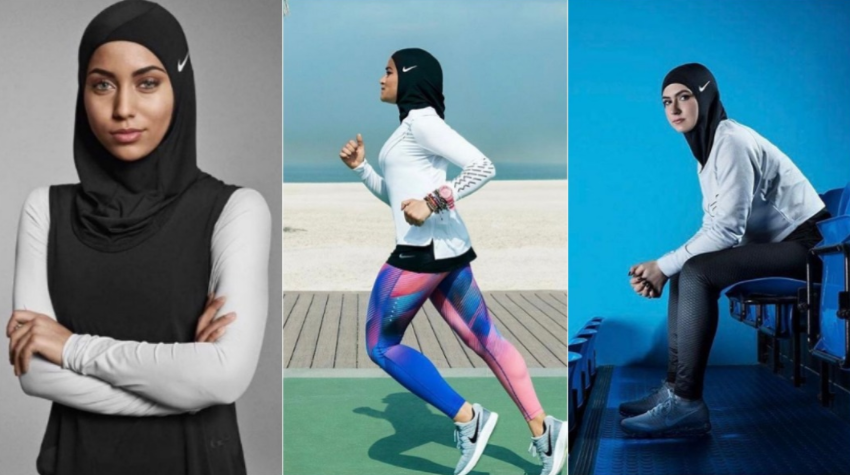 The Pro-Hijab will help Muslim women engage in more sports.

In the spring of 2018, Nike’s latest project will be released, revolutionizing the ability to exercise for muslim women around the globe. For centuries, women who chose to wear a hijab (a veil worn by muslim women to cover their head and chest) have struggled to find a suitable head scarf to wear when working out. The need for a specialized hijabs for working out arose when muslim women participating in the Olympics could not find an adequate hijab that would allow for maximum comfort and sweat resistance. Traditional headscarves are often made out of cotton, which is not only uncomfortable to work out in, but it is not sweat resistant or firmly placed on the wearer’s head.

Nike’s goal was not only to create a suitable head covering for female athletes, but to

inspire women and children to break the barriers. This will in turn translate to third world countries being more active participants in international sporting events. However, the concept of Nike supporting Muslim’s through this launch has enraged thousands of people across America. Many have gone so far as to boycott the company as a whole due to the launch of the Nike hijab. Some people have said that the company advocates for the suppression of muslim woman.

“The Nike pro hijab is a symbol of acceptance. It assures the fact that Muslim women can do so much with a piece of cloth on their head, which is often seen in a negative light. I’d definitely wear this,” wrote Fariha Sheikh (‘18), the co-president of the Muslim Student Association at Cherry Hill East.

The hijab is created from breathable polyester deliberately placed with holes to maximize breathability.  The product will initially be released in black, gray and obsidian, available in XS/S and M/L. The stretchy fabric creates a personalized fit for the wearer and allows them to customize how tight they would like to wear their hijab, depending on the type of sport they are playing. The hijab will be marketed in stores and online for a selling price of $35.

Amna Al Haddad, a weightlifter for the U.A.E had worked alongside Nike to help the company create the perfect athletic hijab. Formally competing in a hijab in the past, Haddad had publicly spoke out against critics who looked down upon the company for creating the athletic hijab.

“I support Muslim women with or without a hijab, and how they dress is their choice. And with the Nike Sports Hijab, it surely will encourage a new generation of athletes to pursue sports professionally; without us athletes who fought for this right and made it happen. Nike wouldn’t ‘just do it.’” wrote Al Haddad.