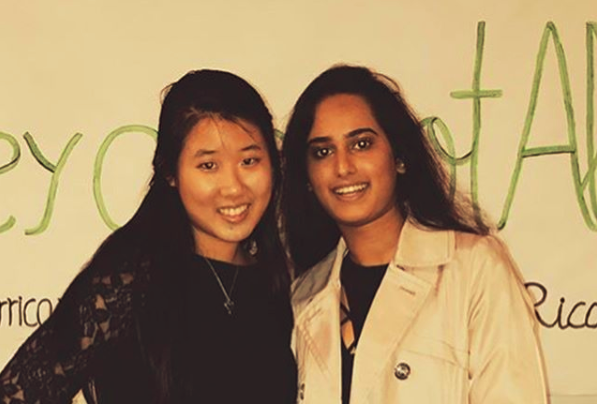 Joyce Park (left) and Ishita Panwar (right) co-host a fundraiser to help the victims of the recent hurricanes.

For Ishita Panwar (‘19), it all started out as another typical August night. With school quickly approaching, she was trying her best to hold onto what little was left of her summer break. Reclining in bed, while trapped in the vortex that is YouTube, she happened upon a series of live footage from the stream of recent hurricanes. She was enthralled. The effects were absolutely devastating: kids were drowning in the thigh-high waters; houses were crumbling apart under pressure of the falling trees; victims had lost everything, even the basic necessities for survival.

At times like these, Panwar would typically go and talk out her emotions to her parents, but it was late at night, and they were asleep.

Panwar, however, could not simply forget and fall asleep, especially not after watching all those horrifying videos. Needing someone to talk to, she messaged fellow classmate Joyce Park (‘19) explaining the mortifying conditions these hurricane victims now faced. After thorough discussion and an exchange of encouraging messages, late that August night, an idea was born: the two would host a community-wide fundraiser to raise both funds and awareness for the millions of hurricane victims.

Together they embarked on what would soon become a months-long process of organizing, communicating with potential donors and performers, and of course, many long nights.

Alas, the fundraiser took hold on October 29th at the American Legion’s Center in Gibbsboro, marking the culmination of all their hard work and dedication.

Even with my peers, I hope they realize that regardless of your age, there is always something you can do. A lot of people think that young people can’t do it all, and that is something that I am actively trying to change.”

“We initially tried to hold the event in September, because we wanted to do it as soon as possible, but when you want to do an event like this, you want to do it right… And there were times when it was so hard. You know, I’m only 16, so it’s not always possible to accomplish everything I set out to do. Towards the end, it was a lot of cramming and calling one restaurant after another after another,” explained Panwar.

The fundraiser was designed more or less like a coffee-house, similar to one the music department puts on every year. There was a variety of food and drink provided by local restaurants. Park and Panwar also invited many of East students to come and perform. Arya Amaro (‘19), Shermety Nguyen (‘19), Amanda Wang (‘19) and Park herself all put together a dance routine entitled “The Cou-girls.” Jonathan Cohen (‘19) in addition to playing a song on his guitar, also performed a duet with Amaro.

But for Panwar, the event was about so much more than just the performances. In fact, one of the things that surprised her most was that all the students she contacted to perform were more than willing to help out. She realized that it’s not that people don’t want to help, it’s that they don’t know how to. For her, being able to create a platform for people to come and help out was an absolute honor.

Panwar also mentioned how after the event was over, she had a multitude of people come up to her and commend her on the positive environment she was able to create. Not only did her event foster discussion about the importance of taking action especially amongst younger generations, but it also helped to unite the community.

“It was something people felt proud to be a part of. After donating money and coming together to talk all day about something as important as the disastrous conditions, you really just feel accomplished. And I think a lot of people felt that. A lot of my friends contacted me thanking me for what I did and they said that if I ever plan another event like this, that they would love to help out,” said Panwar.

News of the event was spread primarily by mouth or by personal invite. Since there were no set tickets, attendees would donate however much they saw fit. Each donor was then named a “Hurricane Hero” and was thanked for their contributions with a bracelet having the words “Héroe Huracán” (spanish for Hurricane Hero) on it. Because there were quite a few bracelets leftover, Park hopes to sell the remainder of the bracelets throughout the year with East’s Fight for a Cure Club. All proceeds will go towards helping the victims in Puerto Rico.

In total, Panwar and Park raised over 1,000 dollars through their event. All proceeds will go directly to UNITED’s Philly Chapter, who will use the money to help Puerto Rico get back on its feet.

Both Park and Panwar were pleasantly surprised with the outcome of the event, but more so than anything, they hope that their actions will inspire both the younger generation as well as their peers to take action in their communities and to not let their age stop them when it comes to making a difference.

Panwar ended saying, “I want people to know that there is always something you can do. I work with young children in my nonprofit and everyday I teach them to be better people and better leaders and this is my way of showing them that it is possible to do. My motivation was really to create young leaders and I hope that people look up to me and see that taking action is possible. Even with my peers, I hope they realize that regardless of your age, there is always something you can do. A lot of people think that young people can’t do it all, and that is something that I am actively trying to change.”