In the cold month of March, it is hard to find color in the desolate winter landscape. The Philadelphia Flower Show provides an escape from the harsh season with colorful and original displays of flowers.

Every year the Flower Show chooses a theme that is interpreted by designers in their flower exhibits. This year, the theme was Italy. The first display honoring the country welcomed guests as soon as they entered the show. When arriving, guests’ noses were filled with the scent of fresh spring roses. The aroma was created by a massive arrangement of pink and red roses that rested on a stone pedicel. Surrounding the pedicel were two rows of high beamed arches, with smaller boutiques of roses resting on top. After the arches, tall white columns surrounded a long fountain. The first display was created to showcase Rome’s gardens.

Venice, another section of Italy, was showcased in a water based exhibit. A large wooden gondola was stretched across a pond. The gondola was adorned with white carnations spread on the edge of the boat. Encasing the pond were window boxes bursting with roses from colors of red to blue. At the back end of the pond was a house styled to match the architecture of Venice.

To represent Milan, a city known for its fashion, designers created clothes made completely out of plants. One dress was made entirely of wooden sticks; the sticks were woven together, creating patterns across the body of the dress. Another outfit was made from pink and blue dried hydrangeas. The flowers were arranged in a long train that flowed at the back of the dress, while the top was constructed from moss.

Italy is famous for its wine and art work. The flower show captured these elements throughout many displays. In one exhibit, a large wire wine bottle was covered with red ivy. Underneath the bottle was a stone patio, which was covered with tables topped with dinner settings. In the center of the tables were arrangements of light colored summer flowers, adding to the feel of a casual outdoor summer meal.  Another exhibit celebrated pieces of artwork, such as the Mona Lisa, by showcasing the art on large paint easels. Beside them were enormous arrangements composed of red urns, lilies and tulips. Inside the flowers was a vintage picture frame, portraying the arrangement as the art.

Although Italy was the main focus of the show, some exhibits took a more abstract approach to their displays. One exhibit presented a thin branched tree spray painted with bright neon colors. The tree branches reflected over large buckets of water, allowing guests to view the entire tree in one glimpse.  Another abstract display featured dangling flower chandeliers that hung over a blanket of roses.

The tone of the Flower Show made one feel as if he/she had just escaped to fantastic Italy. The exhibits embraced the country’s culture with vivid gardens, making guests feel as though they had taken a trip to Europe. Surrounded by the warm atmosphere of fresh flowers, Flower Show guests felt as if spring had already arrived. Or, as the Italians say, Benvenuta Primavera! 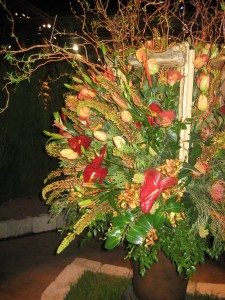