Explore the science behind Pixar at the Franklin Institute 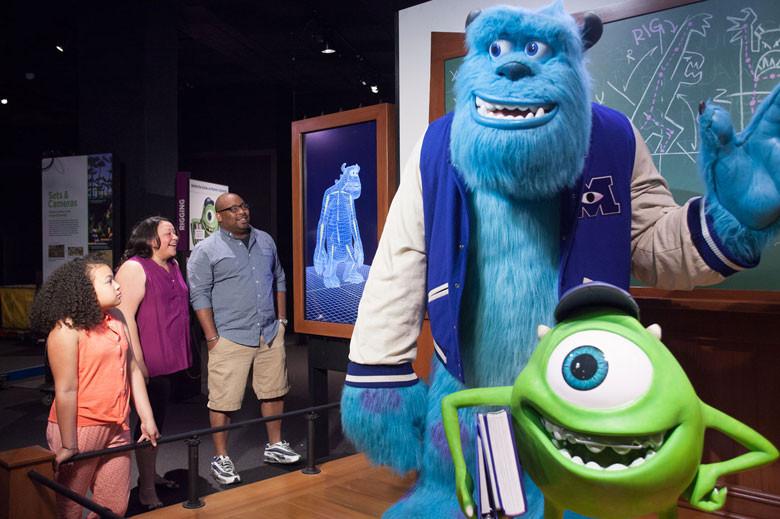 Lovers of Pixar films will have the chance to learn about the behind the scenes process of producing their favorite characters.

For a limited time starting this spring and going to the end of the summer, Pixar has an exhibit at the Franklin Institute in Philadelphia. This is all part of a project to showcase the Science, Technology, Engineering and Math (STEM) that go into every single Pixar masterpiece. At this exhibit, favorite movies and characters such as Buzz Lightyear, Wall-E, Dory, Mike and Sully and Edna Mode will be brought to life.

Before entering the exhibit, people can sit in a mini theatre to watch a short five minute video that summarizes the processes that goes into creating a Pixar film.  Stepping into the actual exhibit, guests are greeted by human-sized Mike and Sully in their math class at Monsters University. In that room, there are also various stations that explain in detail the processes of finalizing a Pixar film.

One of the very first steps of developing a Pixar film is modeling a character. At the modeling station, guests will have the chance to use an array of magnetic pieces to build a character.

At the rotation station, there are instructions that show how to control turn 2D objects into 3D by rotating a lever. This station also includes an extrusion station through which virtual objects are converted to 3D.

In the back of the exhibit is the lighting station. This station allows for anyone to experiment with different lighting techniques. Guests can locate the mini sets through which they can actually change lighting, time of day and more to create an ideal Pixar stage.

To the right of the lighting station, is the surface station. Using a touchscreen, you can create your own surfaces using backgrounds and images. When exiting this room, you are brought to a ramp which from time to time, has mini workshops that showcase how some parts of Pixar films work. Up the ramp is another part of the exhibit, which includes more of the computer parts of creating a Pixar film.

A big part of this room is the animation station, which depicts the tedious work of creating frames in a Pixar film by moving objects. This section also includes the simulation station. Here, guests are able to change pretty much all aspects of a Pixar film utilizing many different factors such as setting, character, and even the movement that the characters make.

Next to the animation station is the rendering station. Rendering is essentially turning plain 2D objects into 3D works of art. Guests have the opportunity to  touch up images and create a mini video. This station demonstrates how complicated it is to create a Pixar film.

Last, but certainly not least, is the gift shop, where guests can check out various Pixar themed items from vintage Buzz Lightyear’s in a box to a life-sized Woody cowboy hat.

The exhibit opens March 12 and closes September 5, 2016. Exhibit ticket prices which include access to the entire museum are priced at 25 dollars for kids (between the ages of 3 and 11) and 30 dollars for adults.