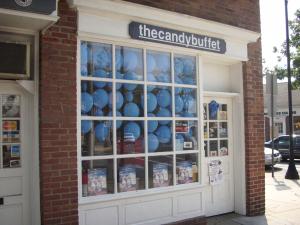 It’s Valentine’s Day today, so what better way to show your loved-ones your appreciation for them than with chocolate? We found a few places in the Cherry Hill area for you to buy chocolates.

The Candy Buffet by Marlena Penn (’16)

Valentine’s Day is known for flowers, cupid and, of course, chocolate. And what better place is there to buy chocolate than at The Candy Buffet in Haddonfield?

Choosing something to buy may be a challenge with such a large selection of candy at the Candy Buffet. When you walk into the store, the first thing you see are the walls lined with almost 100 gummy candies and about 100 other kinds of candy from  pop rocks to chocolates. They also offer 21 different colors of M&M’s.

The Candy Buffet sells the most chocolate on Valentine’s Day, according to Hannah Murphy, a current employee.

When buying these sweet treats for Valentine’s Day, it is definitely men who do most of the shopping. People generally spend from 50 to 100 dollars on chocolates.

The shop’s most popular Valentine’s Day item is Godiva chocolate and Asher’s chocolate assortments. Day-before-shoppers are not uncommon at The Candy Buffet; in fact, February 13th is when the store sells the most chocolate.

The candy buffet has been in Haddonfield for ten years and is owned by Jack Whitcraft.

“Jack used to work at candy stores in malls and wanted a nice small town with less kids [to open up his own candy store],” said Murphy.

The Candy Buffet might be a small store, but when looking at the large amounts of candy, you would never guess it.

Did you know that more than 36 million boxes of chocolate are sold for Valentine’s Day each year? Bayard’s Chocolate House in Cherry Hill is one of the many places contributing to that number.

The recipe for Bayard’s chocolate was developed in 1939 when James Bayard Kelly II made it from scratch. Now, people still look forward to eating these chocolates for any special occasion.

The average amount of money that most people spend on Valentine’s Day chocolate is anywhere from 30 to 35 dollars, according to a store employee. Much of that money is spent on Bayard’s chocolate-covered pretzels – their most popular delicacy.

Many people come to Bayard’s Chocolate House to add joy to their favorite holidays. The candies are so delicious, why wouldn’t you?