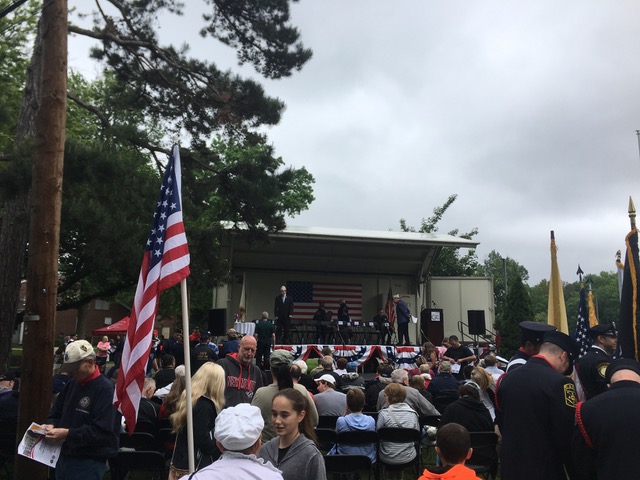 The stage for the ceremony at the Cherry Hill Municipal Complex

In 1971, Memorial Day became a federal holiday which is observed on the last Monday of May each year. It provides Americans the opportunity to honor members of the armed forces who have died while in military service. Flags are flown at half-staff and many communities acknowledge the holiday by hosting ceremonies and parades and by placing American flags at veterans’ memorials and gravesites. 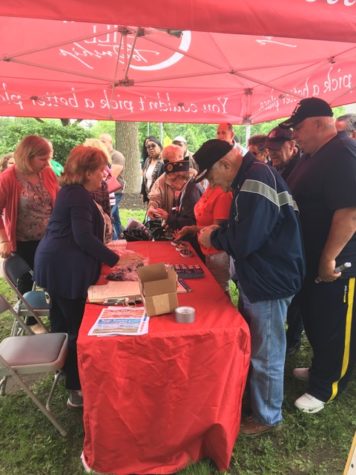 In 2000, driven by a desire to promote greater understanding of the Memorial Day holiday, President Clinton enacted the National Moment of Remembrance Act. The act calls for a national moment of silence to be observed at 3 p.m. local time throughout the country. This symbolic moment allows citizens to pause for one minute and reflect on those who have sacrificed their lives in service of the United States of America.

A highlight of the ceremony was opening remarks from Cherry Hill Mayor Chuck Cahn, who asked audience members to take the time to shake hands with a veteran and thank them for their service. Cahn also reminded attendees that, as a community, in recent years, Cherry Hill has suffered the loss of several members of the armed services.

“As we know, Memorial Day has taken on a very personal significance in Cherry Hill in the last decade with the loss of three of our own in the wars in Iraq and Afghanistan: Lieutenant Colonel John Spahr, Captain Gregory Dalessio and Lance Corporal Jeremy Kane [a 2006 graduate of Cherry Hill East High School], son of our own councilwoman and gold star mother Melinda Kane,” he said. “. . . . Sadly, this year we lost another Cherry Hill son  . . . sailor Kenneth Smith, a 2013 graduate of Cherry Hill East High School and a resident who lost his life on August 21 in a collision between the USS John S. McCain and an oil tanker. We are thankful for Kenneth’s service. His name has been added to the war memorial . . . .” 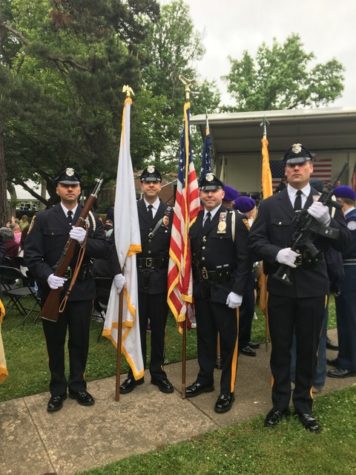 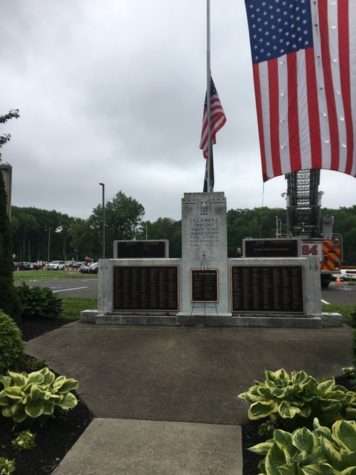 Sophia Sitnick (’20)The American flag raised at half-staff among the war memorial.

David Fleisher, Township Council President, called on veterans to share their experiences so that younger people will understand the sacrifices that our military members have made for our country.

“To our veterans here today, we ask you to please tell your stories,” he said. “If you’ve already told them, tell them again. We thank you for your service and for helping ensure we never forget the cost of freedom.”

Although a scheduled flyover by F16 fighter jets was cancelled due to weather conditions, attendees enjoyed multiple uplifting performances by the Cherry Hill Pine Barons Chorus. Songs performed included the “Armed Forces Medley” and “America The Beautiful.” A military salute followed by a heartfelt bugle performance of “Taps” by Cherry Hill East’s very own band director, Mr. Timothy Keleher, was apropos to the occasion. At the end of the ceremony, local Boy Scouts and Girl Scouts placed a wreath at the war memorials. After the ceremony, guests were treated to lunch provided by Wegmans.

All of the speakers at the Memorial Day ceremony shared a common message urging community members to honor the courageous and selfless acts of courage of those that gave their lives. 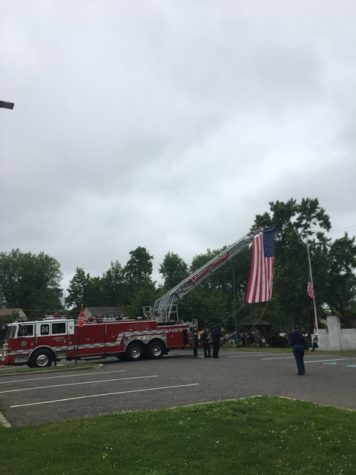 Sophia Sitnick (’20)A flag displayed from a firetruck.

Although there was a standing-room-only crowd, Fleisher emphasized the importance of getting more young people to attend the event. He asked that the next generation take the time to recognize this nation’s heroes and the meaning of Memorial Day. All members of the Cherry Hill community are invited to attend the ceremony next year to experience the moving program.