A march to remember: walk gives honor to Holocaust survivors 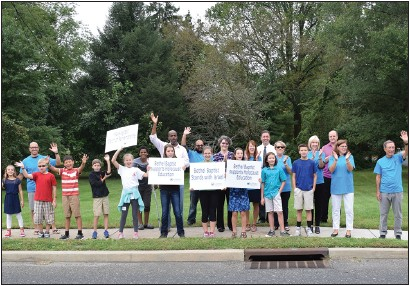 Marchers gather on October 6 to honor and give a voice to Holocaust survivors, spreading a message of compassion throughout the community.

The March of Remembrance, a Holocaust memorial walk, takes place annually on the first Sunday of October. Hundreds of people attend every year to remember the holocaust and encourage tolerance.

The march seeks to give honor to Holocaust survivors, give survivors a voice, and to combat bigotry and prejudices. Its main focus is on the promotion of a compassionate and open-minded community that allows everyone to live and express themselves peacefully.

Coordinators of the march work to promote this message all across the United States; the global initiators of the program, Pastors Jobst and Charlotte Bittner, are located in Germany. The initiators have established ministries and churches across eleven countries, all of which advocate acceptance and open-mindedness.

Many members of the Cherry Hill community participate in the march yearly, many of whom are students. Lillian Halden, a Language Arts teacher from Rosa International Middle School, organizes a group of marchers from her school every year to march and spread the message of tolerance.

“I’m leading a group of students …and it absolutely warms my heart that so many people come out to take a stand against hatred,” Halden said. Halden has Holocaust history in her ancestry, her mother and father were both Nazi slave laborers, and her inlaws were also WWII victims. “My family could’ve died in the hatred of the time period.” Halden finds the march a “symbol of hope against the hatred that has risen in the past years.”

Halden has taught Language Arts at Rosa for 20 years and has been teaching the Holocaust and tolerance to her students along with her lessons for 15 years. She began initiating this march alongside the students four years ago, with a growing number of marchers every year.

Halden said, “We started out with maybe twelve students, and then the next year we had twenty-five, last year over fifty students marched and we expect even more this year.”

Halden feels that the event is very relevant because of the rising hatred in the world today and that it gives her a sense of hope. She says that “if we ignore that hatred, if we don’t take a stand, and show that we are for being kind, we are for treating others in a good way. If we don’t do that we open ourselves to the possibility of more hatred.”

Many of the student marchers express similar sentiments. East student Shivani Hirata-Chadron (’23) participated in the memorial walk for three consecutive years during her time at Rosa International Middle School.

“The march is really inspirational for those who participate and for me,” Hirata-Chadron said. “It’s important to the community and to the world.”